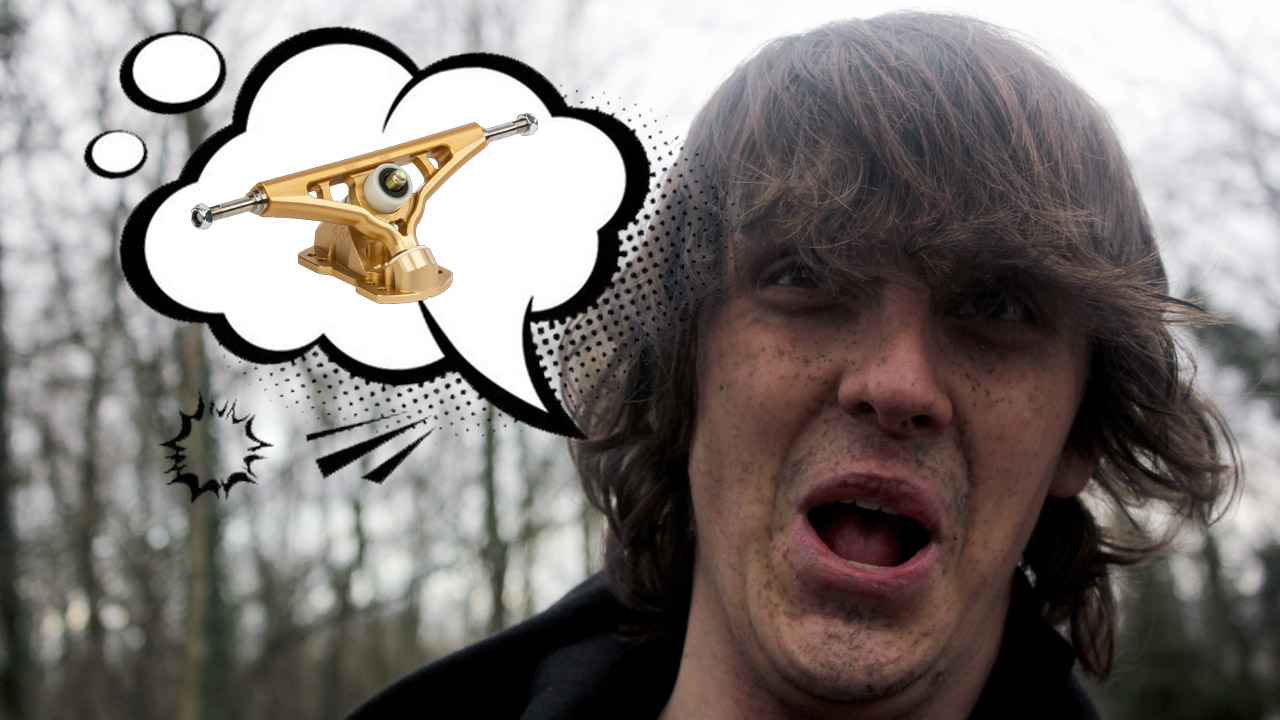 Longboard trucks have come a fair distance. From resembling great large hunks of metal, looking as if Thor had a drunken rage, to metallic pieces of artwork and enough precision to make a Swiss watchmaker cry.
Related: Aera Trucks RF-1 longboard trucks
Having said this, it’s essential to note that the longboard industry, especially for truck manufactures, has seen a decline in recent years. The reasons why could in themselves create another article altogether and when the conversation does spark, creates a debate more heated then the question of does pineapple belong on pizza.
With this in mind, the quality of longboard trucks has been rising significantly, with many new players entering the game and some old faces closing up shop. These new truck manufacturers such as Skoa and Rouge have been giving the old crew on the scene (Rey, Paris, Bear, Aera and Randall to name but a few) a better reason to come up with more ideas then the creative team at Disney on Adderall. Sadly, Rey are no longer around, but from their demise, a great deal of research and development has shone through.

Aera’s new K5 truck has been making the rounds on Longboard Porn 2.0 ever since a photo of Byron Essert’s front truck with Matt Kenzie directly behind him in a race heat touched down in 2016. The Clinching of the IDF No.1 by Carlos Paixão on the new trucks has also had many both excited, but also dreading how many limbs/years of savings would be needed to afford the K5, with a flurry of selling of old skate gear and prized possessions in order to leap onto the Skate one website faster than a cheetah in the Serengeti.
Which brings us neatly onto the beginning of the review! Having K5s shipped across the Atlantic to England terrified my frilly arse for two reasons. Firstly, will I be made bankrupt by the Taxman slipping the customs duty under the door like a silent assassin and secondly, will FedEx ‘Lose’ the parcel the second it leaves the warehouse?

The ordering process and setting them up

Ordering them, I had a general sense of bewilderment, but also elation.

I can feel my wallet getting smaller than the surface area of a dice adding the sums, but I feel stoked that I’m getting them.

It’s a feeling so bizarre that I ended up looking at the mirror after clicking the PayPal button and wondering why I had done it. Nonetheless, after just three days, the FedEx man did arrive with the trucks, with my inner child proceeding to run inside and rip the box open with delight.

Set-up was super easy, the kingpin sitting super far into the baseplate meant that at first I thought that I was sent the wrong length of axle, but after gentle persuasion with a skate allen key and the tool, the two kingpins rested super well, the new pivot cup design, after a bit of squeak, snuggled the hangers pivot pin like a sleeping bag.

The trucks do come with 88a hard core bushings, with a soft side and a hard side, in other words witchcraft dual duros. I decided to try them out, despite usually riding 95a/92a owing to weighting 95kg.

Dancing on the K5s is incredibly stable and one of the great surprises of the review, going along the pathways, I thought that I would be struggling at lot with a 164mm hanger, but it was not to be.

The extra-large pivot cup and the reaction to pop shuvits, Peter pans and cross steps was predictable and flowed through the truck more fluently then the notes out of a grand piano.

I would say that if you are going to use the K5s for partially this purpose or to carve a lot, 168/174 mm would be better suited, since the 164 mm hangers do not have the turning radius to perform the tight circles that a great deal of longboard dance demands. Nonetheless, a brilliant truck for this purpose, even if it’s not a discipline from which you first assume Aera trucks.

Initially, I was worried about doing freeride on such narrow hangers, I thought that the trucks were going to jolt me more aggressively than a Taser. However, the trucks, even on their narrowest width, perform much the same as an Aera K3, but with the stability and precise slide expected from the K4.

Even at slow speed, the trucks didn’t feel like they wanted to jerk back and throw me away and in tight cornering, the truck can be aimed like a laser, taking the racing line and holding you onto it like a limpet.
The 46 degree baseplate is as stable as a bridge foundation and provides a good mixture of downhill and freeride capability, although two lower baseplate options (42 and 30 degree) and a higher option (50 degree) are there for you to decide upon.

Overall, the Aera K5 has had a lot of expectations and demands. The years of debate and speculation have finally been answered and, in my own eyes, the K5 has lived up to those expectations.
A design more sexy then the contents of playboy magazine and an all-round truck that delivers in freeride, downhill and, most surprisingly, dance. Years of research, development and incessant questions have come through with a design that will keep Aera in the game for a very long time.
Worth the hundreds of dollars? That’s entirely your discretion, but fuck yeah in my personal opinion!
Also 5 Star service to Aera for making sure that I had everything on my trucks and for tolerating my incessant emails.
For more about Aera Trucks see their official website at https://aeratrucks.com/.