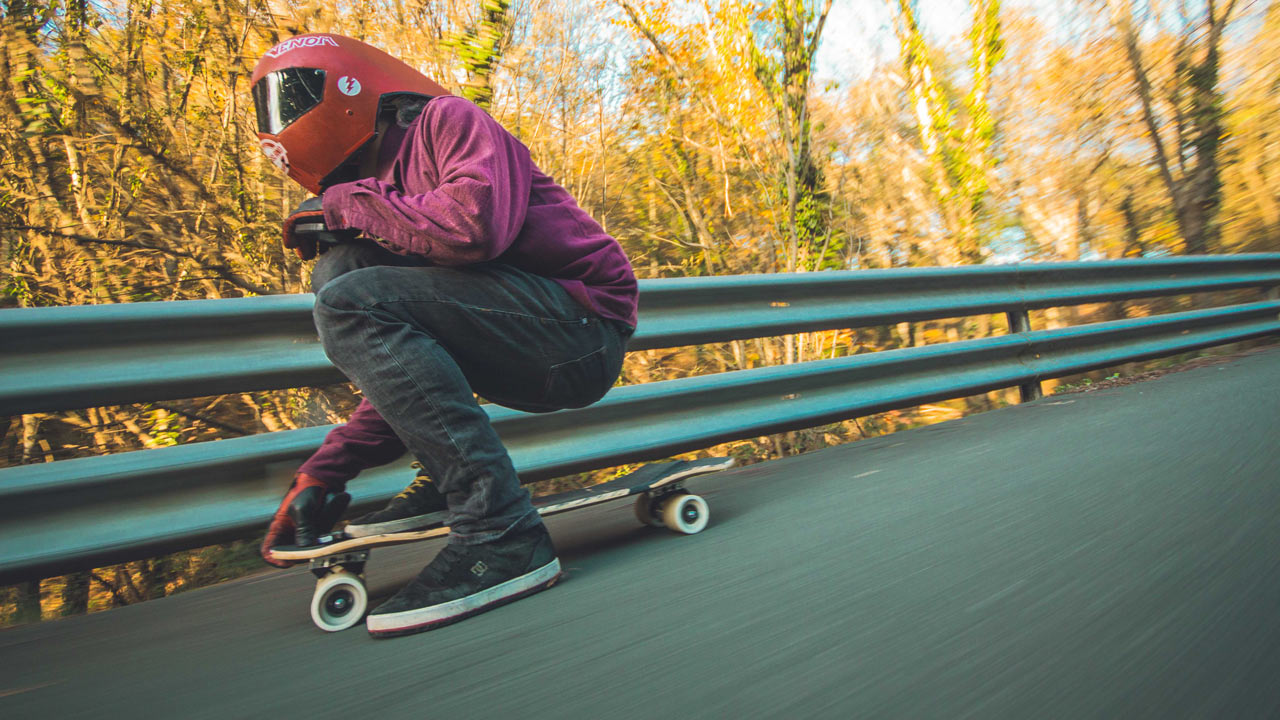 With a boom of XYZ media channels we are able to feast our eyes on a lot of downhill skateboarding visuals. Some are more noticeable than others while the rest hold great memories of a certain era.
Well, Aleix Gallimo is not a media crew, but he is a downhill skateboarder, graphic designer, videographer, tattooer and what to him is most important, a father.
He’s been skating so long he doesn’t even know the exact number of years. Currently he’s living high in the north of the Spanish Pyrenees. His valley called Benasque is surrounded by up to 3000 meter high mountains with plenty of epic descents.
What he truly loves to do is downhill skateboarding, that’s why he is preparing an ambitious project for the 2018 IDF racing season with the aim to help the downhill community and give it the exposure he thinks it needs.

Our industry is running low so we need to put more effort into trying to raise it up. If we don’t do it we’ll be stuck like this for a long time.

One of the reasons he sees a problem with the industry is the amount of people wanting a sponsor without giving anything back. He feels that while it’s great to support skaters, brand owners should know how to support them in a sustainable way. In the role of a skater, he decided to take a more ”hands-on” approach…

What is I’m Gonna Downhill Forever?

Before describing his project to me he said he still remembers a few years ago when longboarding was growing rapidly, brands were getting strong and helped the riders by working with them closely. At the time riders got a chance to travel the world, mixing up different cultures and styles and promoting the sport in different countries.

I work hard to travel, learn and achieve the things I do around the world. That gave me the opportunity to learn from the best and see what exactly is important and what’s not. This is also the reason why I started I’m Gonna Downhill Forever.

This year while attending all IDF events, Aleix wants to show ‘’outsiders’’ how dh skaters meet, travel, learn, have fun, challenge themselves and portray the sport as, what most people would agree with, the best time of our lives.
Aleix will attend races on four continents; Asia, Europe, North and South America, during a 6 month period. He will start the project in the Philippines, followed by South Korea, later head over to Europe to attend IDF races in Romania, Czech Republic, Italy and Spain. He’ll visit the US twice and end the season in South America, Colombia, Peru and finally in Brazil.

During his travels he plans on producing 1 video from each country, 3 quick blog type stories, online streams from freerides and races, and end his project with a final video to recap the whole tour. Besides races, he will also visit other countries along the way. All together he plans on making around 32 videos.

Where can you watch it and how to support it

The I’m Gonna Downhill Forever media will be showcased online, through his personal website and social media channels. For the final World Tour video he plans to have it screened in designated skate shops in order to give them and the local scene support.

I’ll try to show this sport as raw as I can and let people know it’s like other sports, you just need to learn the basics and go step by step and then boom, you’re deep in a fun thing that will bring some of the best times in your life.

At the end of our conversation, Aleix said that so far he has some help from his sponsors and he is going to invested his own hard earned cash, but the project is big. He hopes to receive donations to make this a reality.

For sure I’ll do my best to accomplish this project because I think it’s really important for our sport. My own sponsors help me with the basics for racing, but don’t cover the project. To make this happen I need help with the filming gear, work and I need to pay people for their work on the project.

Because the project is still in the beginning stage Aleix welcomes you to join and help out by donating. To do this visit the I’m Gonna Downhill Forever GoFundMe page.
Aleix Gallimo is supported by Long Island Longboards, Venom Skate, Atopic Supplies, Hondar Longboards, Osteobenas and All Year Longboard.