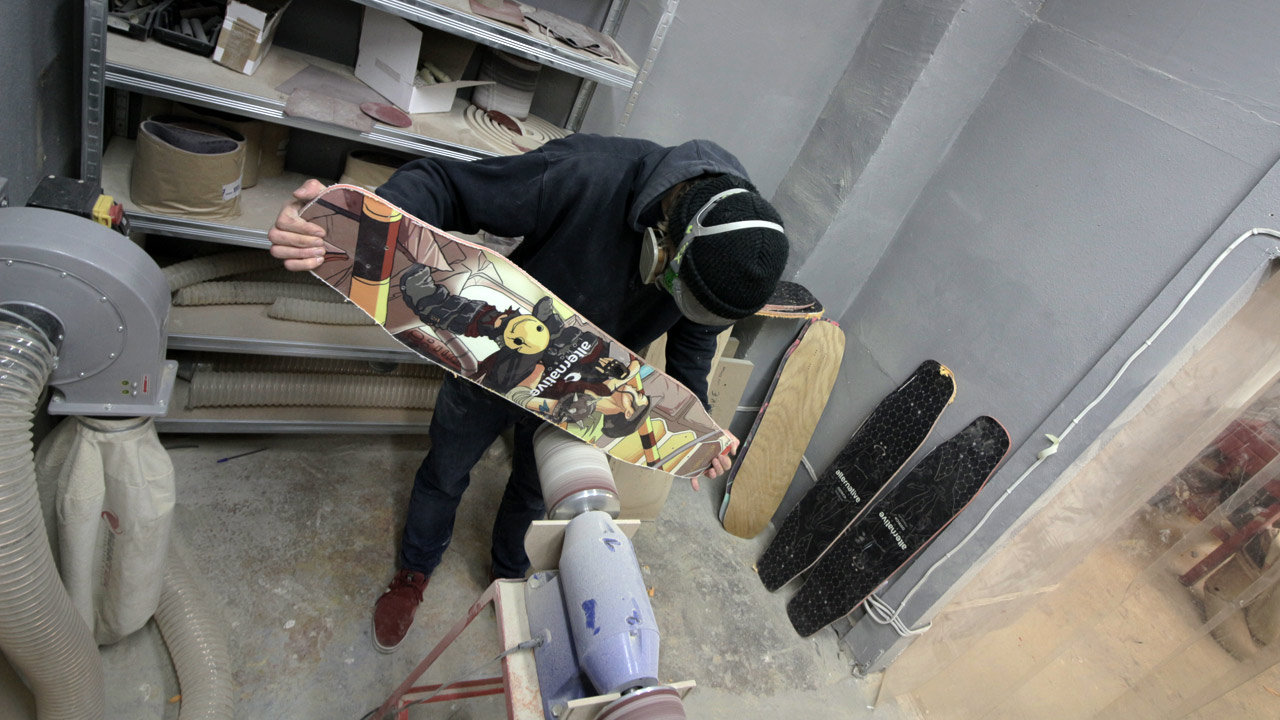 It has been 5 years since Szymon Smialek and Michał Milewicz built the first Alternative Longboards deck in Michał’s apartment in Warshaw back in 2012. Soon after Piotr Dąbrowski joined them.
Since then the Alternative family grew and the project evolved massively. Nowadays it has a very impressive production line in Nowy Sącz where they produce top-notch decks which resemble a very distinguished look and outstanding quality.


Alternative never cut back on the community support and the brand quickly became known to most of the riders across Europe as well as Asia where the scene recently literally exploded.
During the past few years I got to hang out with Szymon a lot as Alternative is one of the regular supporters of our freeride event, KnK Longboard Camp.
We had nothing but the best times together. After many invitations Nadia and I were extremely excited about the opportunity to finally visit the Alternative’s workshop and show it to the world via live stream on our Facebook page.
After 12 hours of traveling through snowy Austria which impressed us with the improvements on the highway rest stops, especially the free WiFi…and driving on what was probably Slovakia’s worst road, crossing a high mountain area, we finally arrived to Szymon’s place in the middle of the night.
After Szymon eased my mind by ensuring us that the Slovakians actually have some good roads as well and that they shred a lot, we didn’t go to sleep as one would expect.
Instead, we stayed up having an interesting conversation and discussing ideas till sunrise. As the day brightened up, we finally decided to catch few hours of rest as we had two busy days ahead…

As you can imagine, we woke up a bit later that same day. The weather was kind of bad all around Europe and Poland was no exception. We didn’t have the time to skate anyway.


As soon as we had a delicious breakfast, we drove straight to the workshop to meet up with the rest of the crew and check out the production line for the first time.
The workshop is located in a somewhat older industrial complex, but once we took the first step inside we were positively surprised as everything looked really clean and neatly organised.
The plan for the day was to get the tour of the workshop and prepare for the live stream which was scheduled for the next day.

We started out by making a very special announcement video with the help of Ja Rom and Łukasz and Aśka Tomkiel featuring an improvised flame-thrower and the famous Polish vodka Žibrowka.
For us, this was out of the ordinary, but the Alternative crew is used to this kind of shenanigans. As Szymon explained in advanced, they are like one big family and try to have as much fun as possible to keep the morale high during long working days which often turn into night.
Later we continued with the factory tour in a more casual manner, still thinking on how we didn’t burn down the building.

While preparing a new layup and cutting fibreglass sheets, Szymon was excited to tell us about their new double wooden cores.


The combination of a soft wooden core surrounded by hard wood makes their decks even more durable and impact resistant. This in turn also increases the wheels wells at any given board by double the amount as in previous collections, with a 6 mm height to be exact.
A new and exciting thing we got to see on the Alternative decks for the first time were the polyurethane sidewalls. After a long 3-year development stage and a lot of hardship to get it perfect, the sidewalls are a big step forward for the brand.

The sidewalls are mainly included in the City Shredder collection for cruising, dancing and freestyle, ranging anywhere between 8 to 10 mm, depending on the model.
As Szymon later explained, freestyle boards tend to get more abused while riding compared to downhill boards.
Including the sidewalls into the Mountain Freak collection for downhill and freeride would affect the decks’ end price, but Alternative wants to keep them as affordable as possible.

Because the brand is already past the development stage, Alternative now has a chance to play around and focus on the board construction and other techniques that make their boards stand out.


During the first season of board production, Alternative scrapped around 100 decks in order to learn and perfect the lamination and pressing process.
To produce the final versions for their 2017 lineup which consists of 11 decks, they had to first produce around 40 prototypes per deck model.

Every deck model requires 3 moulds; 2 for pressing the concave and 1 for the CNC cut process. Thanks to the in-house designed CNC machine they are able to cut the boards and produce the moulds themselves.

As explained in the video, during the 5-year period they spent around 1200 working hours to get the milling process developed to the point where it is now 5 times faster then it was when they started with the tests.
Each of the four main rooms at the Alternative factory has a humidity and temperature monitoring system installed to make sure that the boards are being laminated and pressed in the most suitable environment. The information is then available in a mobile app or computer at any moment. Pretty impressive detail if you ask me…

All boards are being pressed in 5 custom designed and built presses which impress the most with their compact size and great power. All of them are controlled by a single computer station which makes it much easier and faster to operate.

Alternative longboards also uses a barcode tracking system in order to supervise the production of every board they produce.

As the boards go through the production process, they are scanned in each step which enables the company to have an insight in the current production status. All of this information is also available through the mobile app or computer.

Szymon explained that they like to say in a joke that Alternative boards are made with thunder…
It took them 1 year to perfect the sublimation technology which is a process of transferring the graphics from a special paper to the foil.
Thanks to the machine which treats the foil with 10,000 Volts to make them more absorbent to the ink and the in-house designed sublimation press, they are able to produce colourful and scratch resistant graphics.

Nadia was impressed with “the thunder machine” the most as we could clearly hear and see the electricity (in a beautiful purple colour) as well feel a strange sensation in our bodies and heads due to the Ozone that got created around it, just like during a thunderstorm.

Coming towards the end of the production process, the boards are taken to the sanding room where they get as smooth as a baby’s bottom, currently thanks to Ja Rom.

The final stages of the Alternative board production include preparing the boards for their new lucky owners. This involves removing the unnecessary foil, placing a sticker on every board which includes information about when and who built it, plus wrapping it all with love in a protective plastic cover.

We finished our day in the workshop watching Szymon pack one of the boards to be shipped to the new lucky owner. This was my second tour around a longboard factory and I must say the Alternative crew really knows how to make you feel like a member of the family and are sure to leave a positive impression on anyone visiting their workshop.
The next day, we spent preparing for the Live Giveaway and Alternative factory tour we did via our Facebook page. If you missed it, check it below and stay tuned for the upcoming article about the new Alternative decks.
If you can’t wait for it, check out the decks at www.alternativelongboards.com and be sure to follow them via their YouTube, Facebook or Instagram channels.