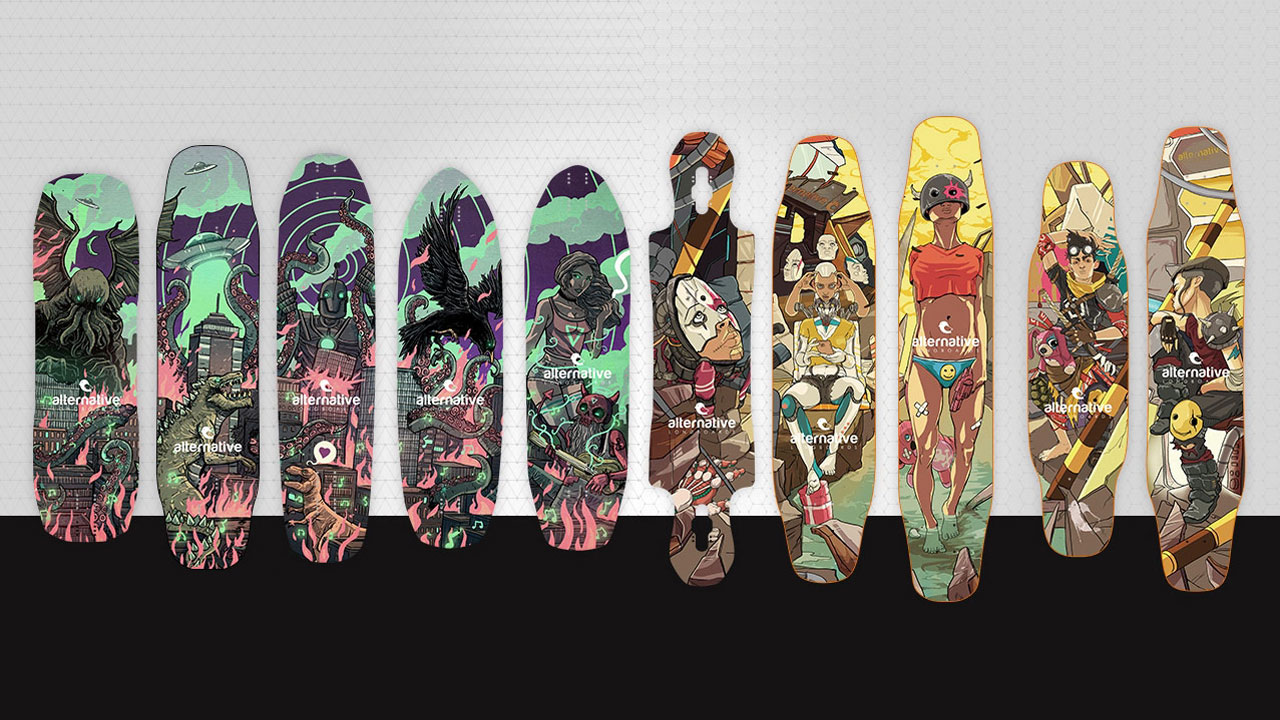 Recently Alternative Longboards invited us to visit them in Poland in celebration of their 5th anniversary. They gave us a long awaited tour around the factory and explained their board production in great details.
Alternative’s neatly organised and almost completely customised production line impressed us greatly. You can read all about our visit and Alternative’s board production in this article.
We were also very excited to share the whole experience in the live video via our Facebook page. If you missed it, you can still watch it here.
In this article we’re going to check out their decks and cover the new ones in more details…

This year Alternative longboards presented two collections, each including 5 longboard decks designed and built for a specific type of skateboarding.
The Mountain Freak collection for downhill and freeride covers everyone who’s primary objective is going fast and sideways while the City Shredder collection offers a range of decks designed specifically for freestyle, longboard dancing and cruising.

This year Alternative is extremely excited to introduce some exciting improvements, one of which is the polyurethane sidewalls. After three years in development, these are now finally included in all City Shredder decks as well as in Mountain Freak’s Chauma (both versions) making the boards highly impact resistant and waterproof.
One of the questions asked during the life stream was why sidewalls are not added to other downhill and freeride boards from Mountain Freak collection…
As Szymon Smialek, one of the owners explained; The freestyle boards tend to get more abused compared to downhill boards and including the sidewalls into the downhill and freeride decks would affect the end price of the products.

While the sidewalls seal and protect the freestyle and dancing boards, most of the Alternative’s downhill and freeride boards are covered by “dual-wood core” which features a harder wood on the outside (board’s edges) and soft light wood on the inside. This makes them lighter and more rigid compared to their predecessors.
So, let’s check out each collection and the decks they hold…

Both Mountain Freak and City Shredder decks now have top and bottom layers with a graphic sublimated on a scratch resistant foil followed by a layer of fibreglass and the double wooden core in the middle. The bottom fibreglass layer also includes carbon fibre stringers which run across the whole length of the deck to deliver the right amount of stiffness.

The graphic for each board in Mountain Freak line-up is actually a part of one big piece created by Sebastian Skrobol. This project marked the third time he worked with Alternative. Dubbed “Big Ass Monsters“, it shows a city in flames and all kinds of “monsters” enjoying the show.

Next to the boards which we already know from last year (Wrobel, Chauma, Bunting and Fantail) the downhill and freeride line-up by Alternative grew by one new deck this year, the Starling.

The Alternative Starling top-mount deck is 96.5cm (37.99″) long and 23cm (9.05″) wide. It has a comfortable progressive concave merged with rocker and micro-drop to ensure that the feet are locked-in at all times. In addition to that, the rocker and the micro-drop lower the centre of gravity resulting in a better stability at higher speeds.
The Starling provides with multiple wheelbase options ranging from 65 to 69 centimetres (25.59″ – 27.16″) making it’s a great choice for those who prefer a wider stance.
Thanks to the fully functional kick-tail, the Starling is not limited to downhill skateboarding only.
The 6mm deep flared wheel wells ensure that this board can also accommodate larger wheels without worrying about getting a wheelbite.
Overall, pretty awesome and versatile deck for downhill and freeride.

Both Chauma M and Chauma W got upgraded with polyurethane sidewalls. Since this deck is a hybrid of freeride and freestyle deck, it is expected to be abused much more then other decks from Mountain Freak line-up and Alternative decided to upgrade it with that extra protection.

You can check out the rest of Mountain Freak decks via Alternative’s website or 2017 catalogue.
Now, let’s see what’s new for the freestyle and dancing freaks…

The City Cruiser also includes five decks, most of them designed for freestyle and dancing, but it covers those who are in it just for the cruising and commuting.

Compared to last year’s collection of freestyle, dancing and cruising decks by Alternative, the City Shredder collection now includes 2 new decks; Verdin and Erget.
The Hummingbird deck has been taken out while Junko, Flamingo and Ostrich has been embraced by many riders which encouraged the Alternative crew to upgrade them for the 2017 release.

All decks in the City Shredder collection now come with the polyurethane sidewalls which makes the boards highly resistant to impacts and waterproof.
Top and bottom sheets are a scratch resistant foil with a sublimated graphic, followed by a layer of fibreglass and a single wooden core in the middle. The bottom fibreglass layer also includes carbon fibre stringers which run across the whole length of the deck and take care of the right mixture of flex and strength.

The graphic on each City Shredder deck is also a part of one big piece created by a talented artist Grzegorz Wróblewski whom Alternative worked with for the first time. Vivid and colourful, these are definitely “eye catchers”. Take a closer look and you will discover many interesting details.

With the Hummingbird out of the picture, Alternative’s City Shredder line-up can’t miss a short agile board for the everyday urban cruising. That’s where the new Alternative Verdin steps in.

The Verdin is 94cm (37″) long and 23.5cm (9.25″) wide and features a single wheelbase option at 57cm (22.44″). It has a mellow radial concave to ensure that it’s both comfortable and responsive.
Described as “short, bouncy and manoeuvrable”, the Verdin has a medium flex and a short wheelbase and symmetrical platform with the kick-tails on both sides. Pumping and carving, some easy skate tricks, that’s what it’s made for.
Since it’s small and lightweight, it’s also great choice for the casual ride to school or work.

The board features a symmetrical platform, double kick-tail, a “delicate” radial concave and is available in soft and medium flex with a single wheelbase option of 74cm (29.13″).
Just like the other boards in City Shredder collection, the Erget also has the polyurethane sidewall built in to protect it when failing the trick and landing it sideways.
Overall, great looking longboard dancing deck…
There you have it 🙂
It was really exciting to visit the Alternative’s factory and see how they produce their boards and to present their 2017 collection…
These guys are really something special; hardworking and extremely dedicated to deliver high-quality products, but they never forget to have fun and that’s what I liked the most about them…After all, skateboarding should be all about fun. Right?
Connect with Alternative
For further information check out the Alternative 2017 Catalogue or visit their website at www.alternativelongboards.com. To stay on track with their latest creations, follow them on Facebook and Instagram.