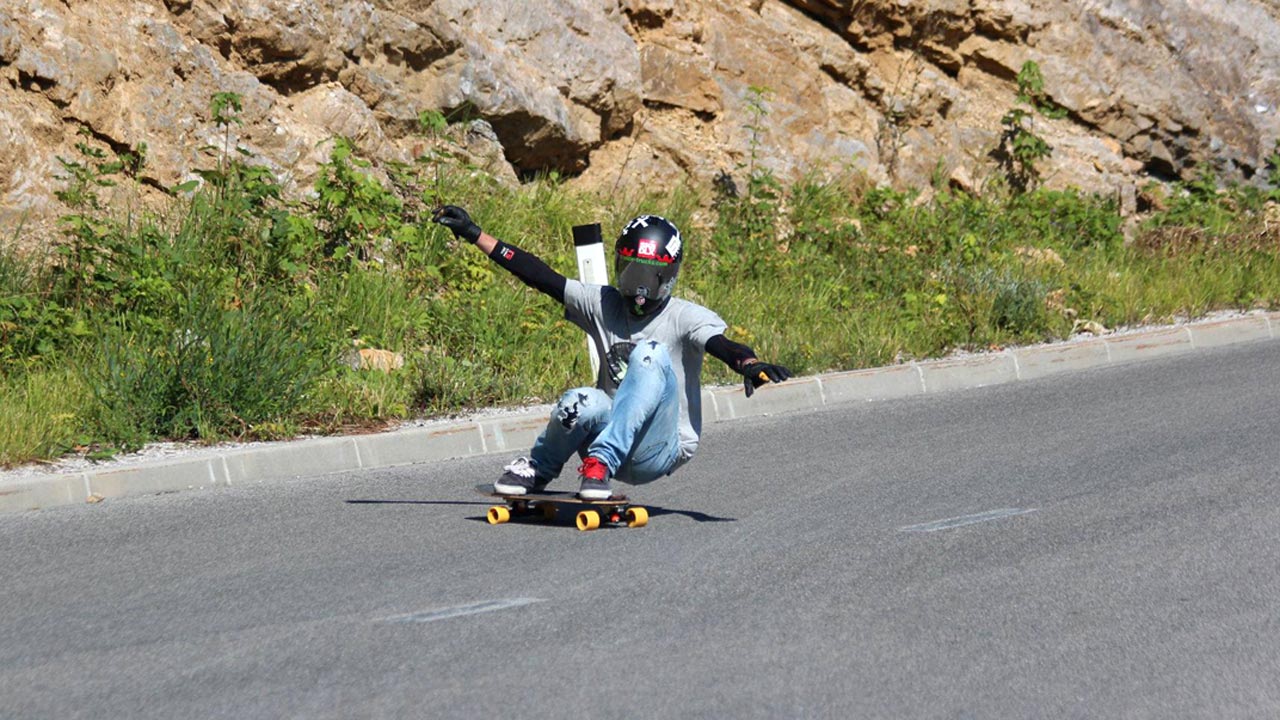 In early 2011 downhill skateboarding in Europe seemed to be more race oriented and people were skating the Bear’s Guts mostly hands down. Nowadays we see riders charging down at 80+ kph without a care in the world, doing fascinatingly long stand-up slides.
We also can not disregard the generation shift in the longboard community. With more and more grooms attending freeride events, the difference in skill levels between the younger and older generations is changing. Grooms are taking over with a fresh mentality as to what downhill skateboarding means to them and how they want to pursue it.
One of those youngsters is Calum Yardley, an 18 year old British, who was born and lives in Alicante in Spain. His 2016 season included visiting freerides in Spain and Slovenia, but also races in Czech and Germany.

As many of us, Calum loves traveling from event to event to challenge his skills and enjoy his time skating with a variety of people you meet at a longboarding event.
While we were talking, he remembered two little brothers at KnK whose parents are a great example of love and support for the passion their kids share.

At KnK, there were two little brothers, I think they were 9 and 11 years old, that really amazed me, even though in my group we have a kid that is only 12 years old and he started at 10. It is really amazing to see such variety of ages in the longboard community, and to know that it is growing, slowly but it is.

Calum also started skateboarding at a young age when he got excited about longboarding by watching videos online. When he was 13 he bought his first deck and was lucky enough to meet a skater, Derek Blanquer, who helped him step into the world of longboarding.
Related: Calum Yardley and Derek Blanquer | Vall D’ebo Raw Run
Since then, Calum says he’s coming up with crazy and fun ideas that make his skate sessions even more interesting and challenging. At KnK he grabbed the Alternative Hummingbird,  a cruiser with 16.7 inch wheelbase, and sent it down the Bears’s Guts track.

Later Calum ended up skating the cruiser for a full day and a half and even one run of the three qualification runs for the Cult Single Set Survivors. Although Calum didn’t win the race, because he dislocated his shoulder, he had an amazing time and would do it all over again. Here is what he had to say about KnK Longboard Camp:

I loved so many things about the event, from the very good organisation to the amazing community there was. The party nights where crazy and lit but you could go to sleep without a single problem. And if you stayed up late enough chilling and look up to the sky you get such an amazing view as well.

We also talked with Calum about what it means to be a sponsored rider. He told us this:

Well, most people would say that getting free stuff is the best thing of being sponsored, but it isn’t. It’s the doors that open for you, new adventures, new friends that you wouldn’t have probably met and the ability to try many new things…depending on the sponsor.
For example, if it wouldn’t of been for NICE Trucks, I would have only went to Kozakov last year, as I had a team mate that could pick me up and take me there, and he was going to many more events, so I decided to go to more events too and meet many awesome people.

Because he had such and amazing season last year, his future plans include traveling to longboarding events with his FreeDivision skate crew and test his skills on different roads and environments. His plan for now is to visit Kozakov again and probably one week of KnK to try to win the Red Bull No Paws Down race and as he says in a joke, to beat Patrick Lombardi, last year’s winner.
Let’s see 🙂
Calum Yardley is a team rider at NICE Trucks and FreeBrake.
Video was filmed and edited by Andrea Pedrotti.