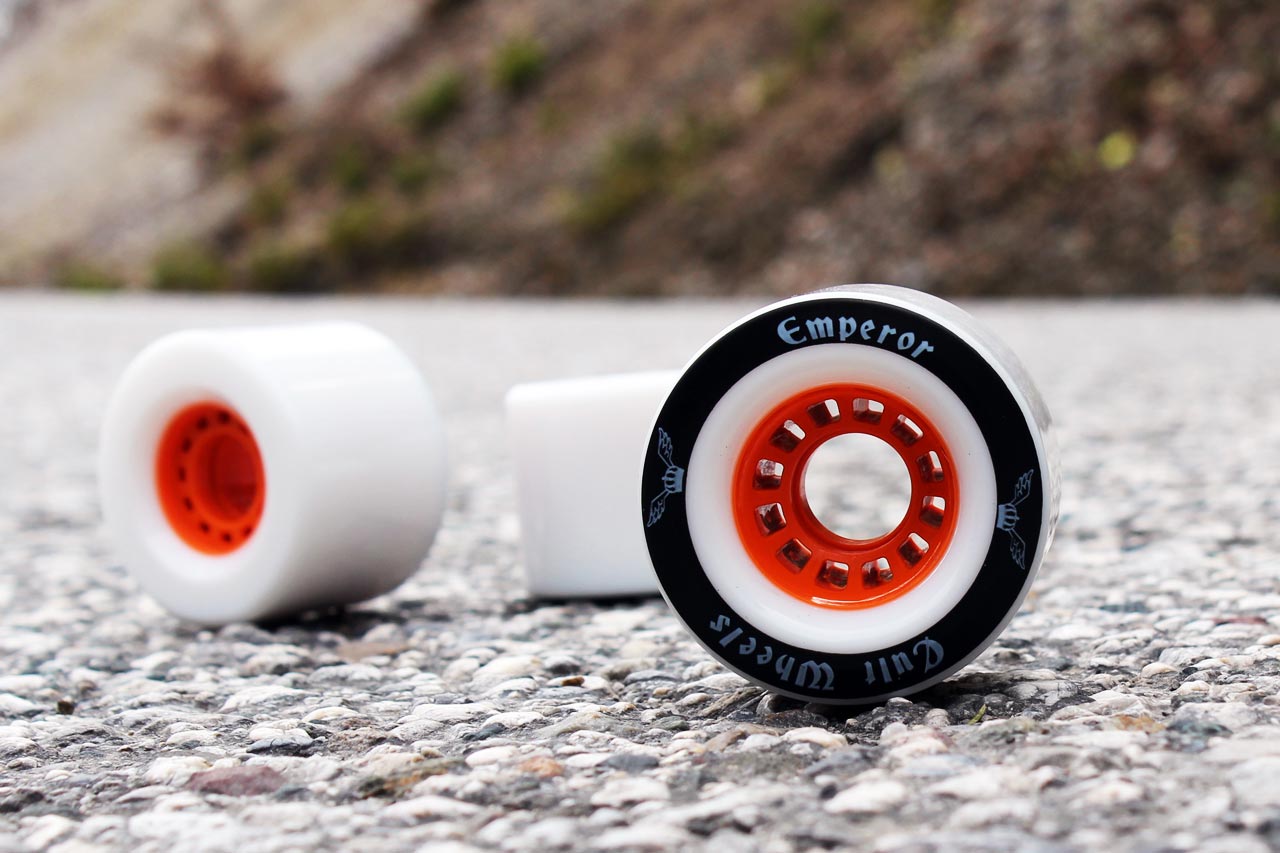 Earlier this year, Cult introduced the Emperor freeride longboard wheels powered by their latest and Jorge Pernes’s new favourite, Dopathane formula. Adam Hill from Cult was very kind to send me a set to try them out and in return I promised to write a review. So, if you’re stoked on getting a set for yourself and want to know how they roll, read through to find out how they worked for me.

Let’s have a look at the basic features of the Emperor wheel first and then I’ll tell you more about how are they “straight out the box”, how’s the slide like and more…

The Cult Emperor wheels are 71mm in diameter and have a 50.5mm wide contact patch, while the overall width of the wheel is 53.5mm. At least for now, the Emperors are available in 78a durometer (hardness) and in white colour only. The Emperors have an offset bearing hub, but I still managed to skate them flipped without noticing any significant difference.
The wheels have a bevelled edge to ensure reliable release, while the wider contact patch and the softer urethane provide more braking power. This combination makes it great especially for faster freeride runs or slidy pavement and it helped me gain confidence to throw some standies at higher speeds then usual.

Besides the new “mid grip” Dopathane formula, the Cult Emperor wheels introduced a brand new core design. The new big vented core supports the lips of the wheels in such a way, that it reduces the lip’s deformation while it’s under pressure. Also, because the core is so big and wide, the weight is distributed more evenly which leads to more consistent wearing of the wheel.
With that being said, it’s fair to mention that because of their big core, the ride on the Emperors feels a bit “harder” on a rougher surface. As expected, on a smoother pavement, they feel great, have nice roll speed and smooth consistent slide.
Getting the bearings out was a bit challenging as they fit very tightly and the core is very hard (I used Zealous bearings). A proper snug fit, I guess 🙂

How are the Emperors “straight out of the box”

The Emperors don’t come with a stone ground finish, so straight out of the box they have solid amount of grip too, but once I manage to break the traction, the slide felt very icy. However, after a couple of solid runs, the skin was finally off and the true nature of the wheel started showing.
Here’s few impressions from the first few drops, shot by my girlfriend Nadia Hozić.
Thank you, Nadia :-*

How do they slide

I switched to Cult Emperor from the much more slidy wheels, Remember Hoots 80a, so I had to get used to it first. Emperor is a much wider and softer wheel then I was used to, but that also led to me getting more confidence when sliding at higher speeds.
So, once the skin was completely off, they had a really nice consistent slide as well as a predictable release and hook up. Although they are 78a, the Emperors were not as grippy as I was expecting them to be.
Slide initiation with the Emperors is as easy as with Cult Cerebrum, but they will slow you down more. Pretty much all of the people I talked with about the Emperors agreed that this is a great mix.

Since the Emperors have softer urethane in combination with the offset bearing hub, I was expecting them to cone, but that was not the case thanks to that huge core. Although they are offset, the Emperor felt very much as a centerset wheels.
Here’s a photo I took on the first day after a couple of hours of skating.

I skated on Emperors for the next 6 sessions until I managed to flat spot one of the wheels after pulling off some longer squat stand up slides, but that was my fault really as I was putting the board too much sideways (at 90 degree). Being a bit overweight at that time didn’t help either.
I managed to wear them down for 1 cm, down to ~61mm when the orange colour (the core) started showing through the urethane (in the middle of the wheel).
However, there’s still plenty of slides left in them and I will finish them off as soon as I get the chance.


In Emperors defence, I think it’s fair to admit that sooner or later, I flat spot every wheel, regardless the brand or a wheel type and durometer. I guess, I suck a bit haha!
Here’s a video from some of the sessions with my buddy Benjamin Sabol (Kebbek Skateboards).
[facebook url=”https://www.facebook.com/mihael.zadravec/videos/vb.785705278/10154015744995279″]

How’s the grip on the Emperor wheels

As I mentioned earlier, while still fresh and with the skin, the Emperor wheels have a decent amount of grip, but they wouldn’t be my choice of wheel for fast grip and rip runs. For such runs, I usually switch to wheels like Cult Traction Beam or similar.
After all, the Emperor is meant to be a freeride wheel and it does slide quite a lot once you put the board sideways. Taking that in consideration, they do serve the purpose very well.
Don’t let that stop you from sending them down the hill as fast as you can manage it… After all, we all have our personal preferences and skating style. What might work the best for me, might not work as well for you.

How much do they cost

The Cult Emperor longboard wheels come in at around 64 Euros which puts them in the upper mid price range. If you’re already an experienced rider, you will find much value in them for that money, that’s for sure.
As for beginners, I would say go for it if you don’t find the price to big for your budget, otherwise, check out some cheaper options. Otherwise, the Emperor wheels are a great choice for beginners as they provide with a really nice mix of a grip and slide characteristics and they will be great for “not super fast” downhill runs as well.

I guess it’s time to end this post at some point, so here’s my final thoughts on the Emperor wheels.
Overall, I find the Emperor to be a great freeride wheel with a smooth and predictable slide once the skin is off. When fresh and with the skin the slide wasn’t that nice and it would be awesome to have them available with stone ground finish.
The wearing of the wheel really is consistent as promised and you shouldn’t have any problems skating them till the core pops out. Although they are offset, due to the big core, the Emperors feel much like centerset wheels and you can flip them in case if you need to make them even again (for example, if you’re a beginner and sliding only heelside or toeside and wearing only one side of the wheels).
That’s all folks! I highly recommend you give the Cult Emperor freeride wheels a try and leave a comment bellow to let us know how they worked for you. Happy shredding!

I guess, who’s better out there to show off the Emperors in action the Jorge Pernes. Right?
For more info and inquiries visit Cult Wheels website.