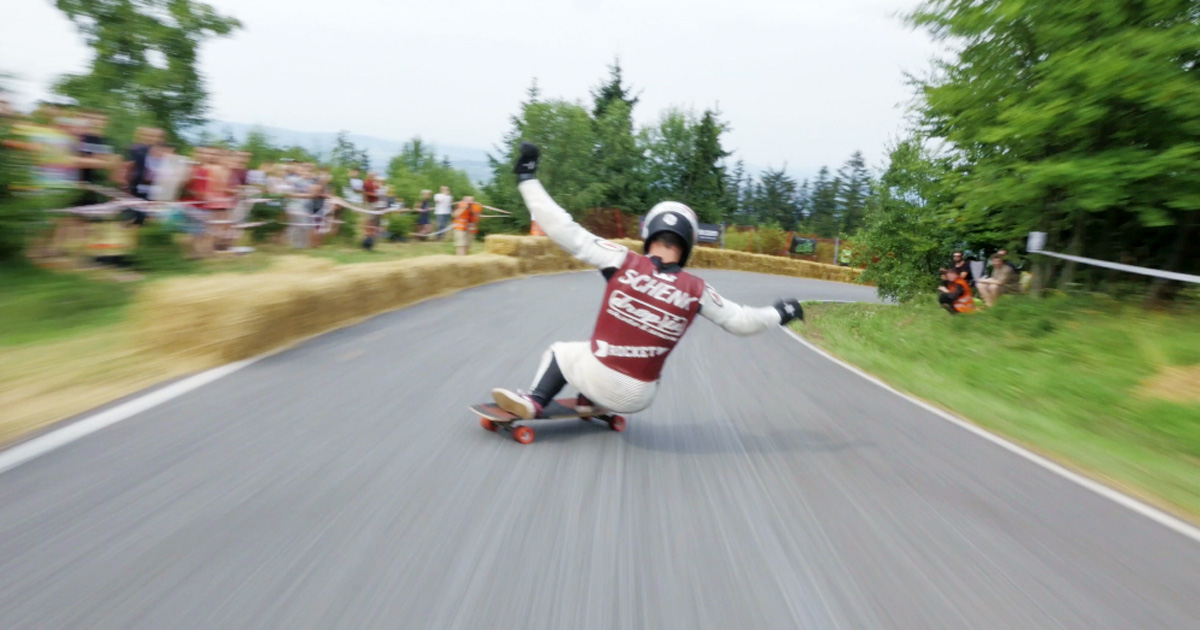 Dominic Schenk likes to challenge himself a lot and this summer he went for a full stand-up run down the Kozakov Challenge track. For many of us, a run like that is just a wet dream, but Swiss downhill skateboarder Dominic handles the 90kmh+ track with high precision “no hand down” slides with much style and ease.

With another Red Bull No Paws Down race being right around the corner, Dominic was excited to announce the challenge via his Facebook profile. I’m not sure if anyone actually tried to do it, but the likes showered and many were eager to watch the premiere broadcast of the run on the big screen at KnK.

Dominic’s full stand-up run down the Kozakov track took only 2:29:378, which would have been top 80 qualification time. I wonder if anyone will try to beat that time.
To get his skating on point, Dominic skates his own pro model deck “Domination” by ROCKET Longboards and RAD Advantage 80a wheels.

This amazing run was filmed with a follow car with Rasmus Klintrot behind the steering wheel.

Disqualified on the start line

During the racing, he blew the start too many times and unfortunately got disqualified from the competition. It seems that the excitement was too much to handle 🙂
Bad luck followed him to KnK Longboard Camp, where he got a stomach flu and had to cancel racing Red Bull No Paws Down. Last year he placed second, but unfortunately missed a chance to win the title. Next year maybe…

However, Dominic also attended the Cult Single Set Survivors race during KnK Week #2 and shared the podium with Andreas Mangold and Florian Fellner.