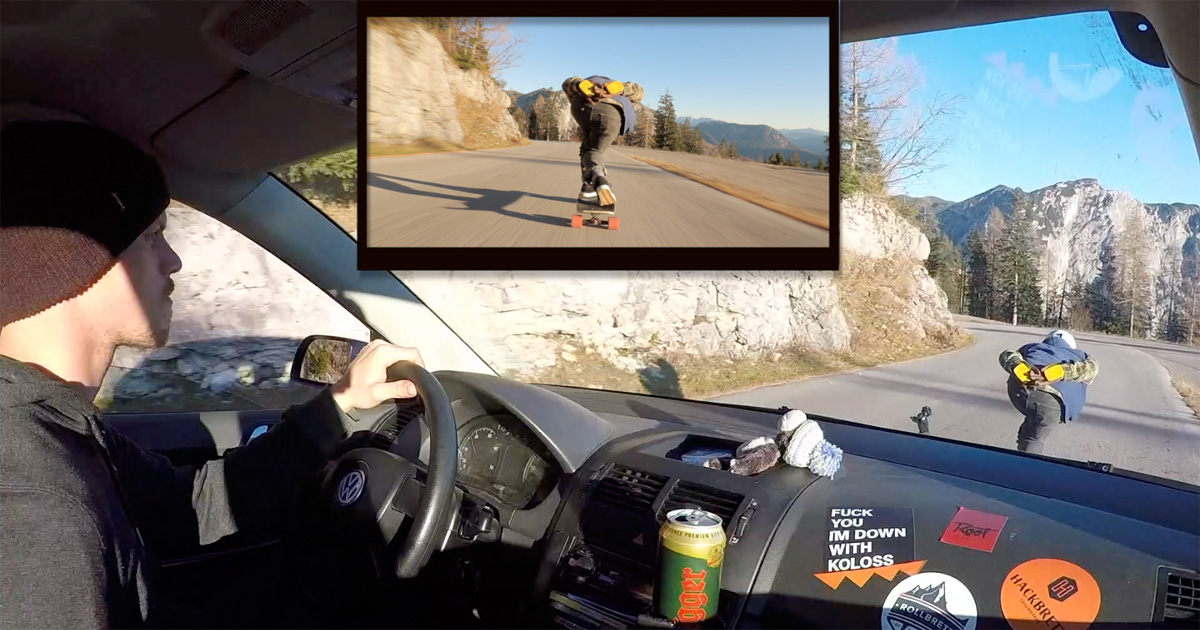 Recently I watched a raw run video featuring Austrian racing machine Quirin “Qui” Ilmer. The Tyrolian beef-cake is really pushing his limits to the max and is always eager to get down the road as fast as possible. Check this raw run to make sure you understand what I’m talking about.

Watching him hitting the roads in such vicious race mode makes me even more stoked about skating fast. Quirin doesn’t care if he’s racing against three other guys, when he’s on the top of the hill, it’s just a nip-and-tuck race between him and the road.
As I was wathcing the raw run video, I couldn’t overlook how damn close to Quirin the follow car was.


Did you realise how damn close to Quirin the car is as he hits the apex? That’s really close! Both the rider and the car driver are not allowed to make any mistakes in these kind of filming sessions.
This reminds me of all those SkateHouseMedia edits done by Alexander “Bad Decision” Ameen. Everybody knows him for beeing really fearless follwing down the skater as close as possible to catch some good footage.
But who’s the guy that rips down with a car like this over here in Europe? Let’s hear it from Quirin:

The filmer is called Nussi (Gregor Nussbaummüller). The wicked thing working with him is, that if you make a mistake, he knocks you over. And that’s the way it should be! The follow car has to stick to your ass as close as possible. Thats the way a raw run should be filmed these days, because then you get the best footage out of a run! ~ Quirin Ilmer

Nussi, a Salzburg (Austria) DH skater is responsible for this kind of action. As I talked to him about this later, he told me that he was putting his first car sideways all the time.
After he passed his driving license, his first car was a rear-wheel drive BMW and this kind of forced him to drift through corners, especially during winter when he was driving up to the mountains to go snowboarding. “Often I would end up in snow off the road”, said Nussi while laughing out loud.
Nowadays he still drives up to the mountains but mostly during summer. He either skates down or follows a skater with his car and a camera fixed to it as he sticks close to the skater’s ass to get the raddest footage possible.
When it comes down to filming with the car, Nussi has some strict rules.

It is very important to know who is in front of you. Every rider has an unique style and tries to transfer it to the road. Downhill bombing or some stand-up freeriding make a huge impact for filming. So mostly I like to skate a run together, to get to know the skater I am about to film. ~ Nussi

When Nussi and I got together, we decided to hit a fun and fast track somewhere close to Salzburg, to show you how he handles the car. If you pay attention closely, you will notice how he drifts “sideways” in a second corner!

When going out filming a raw run, Nussi uses a tripod car mount and a Canon DSLR for filming in high resolution and 25 frames per second.
By the way, this raw run was filmed with a VW Polo, which is “small & crispy”, just as Nussi likes a follow car to be. Still, Nussi also has a slightly passion for big old cars 😉