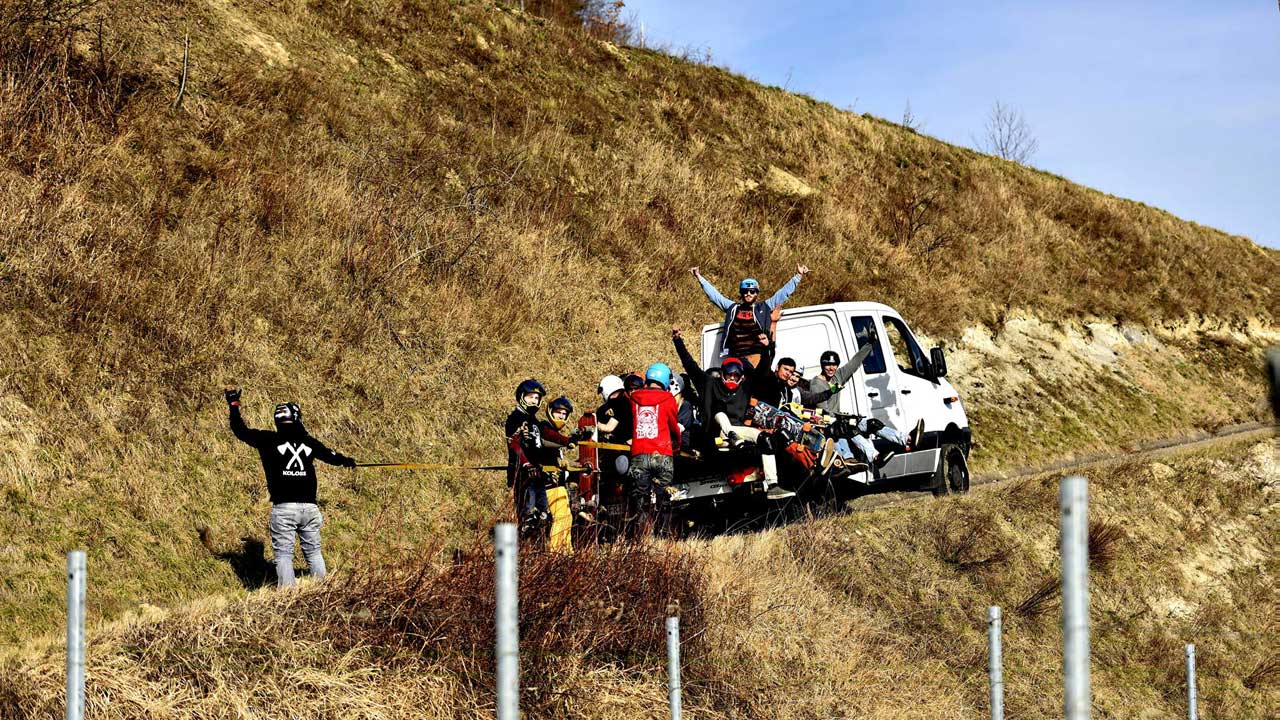 Officially, there is no event, no organiser and no race. People turn up to the hill, and find anywhere between 15 and 45 skateboarders gearing up. Someone produces radios from their pocket, another guy for some reason has green and red flags…a start line appears and brackets are drawn up. This happens once a month from December to April.
Unofficially, this is the Freiburg Winter Outlaw Series.

The Freiburg winter-race-season-baby is now 3 years old. The idea is to get people on their skateboards over winter to keep the downhill juices flowing to carry them into Spring.
Fun runs with friends new and old is the name of the game, race experience and cash prizes are a bonus for those that feel so inclined.


The race series is not a commercial instrument or branded, but it would be impossible to write this article without thanking Layback Freiburg Skateshop for sponsoring the shuttle bus this season. Especially when skaters were using Hackenstein’s personal van!
We would call this one of the definitions of a core skate shop. The trophy is also paid for and hand built at Layback, and quite nice it is too…

Race tracks are slow and technical, they have to be ridden in any weather conditions (and we’ve had some tough ones) and by all abilities.
One push starts keep the racing tight from the top, and especially with tracks as short as 700m long, keeps the emphasis on ones ability to skate downhill to win the race, rather than just kicking like a horse. Not that that isn’t cool too, but you can do that all summer 😉

Last weekend was the 4th race of 5 of the 2016/17 series. Somehow the weather gods have frowned upon The Freiburg Winter Outlaw Series this year and given skaters full sunshine and dry roads for every race! We guess the last one will be bloody miserable.

Here are a few photo sets that can show the race far better than I can describe it to you: Schnsld, Andreas Seemann Photography. Feel free to like to photographer pages, I’m sure there will be more epic photos up there soon!
And check out the little video shot by Henrik Shinko of the day:

Last year Leon Ritter was the series champion for the 2nd time, but it wasn’t decided until the final heat of the final race, and it was decided in spectacular fashion…


This year it could come down to the wire again with Jan and Janto both on form and with 2 wins each. Top 3 results count.

Top ten is as follows:

Final race will be on the most fun and varied race track that Freiburg has to offer, with basically a closed road, shuttles, crash mats…its getting serious! 29th April, see you there!
For more info about the last race of the Freiburg Winter Outlaw Series visit the Layback Freiburg Skateshop Facebook page.