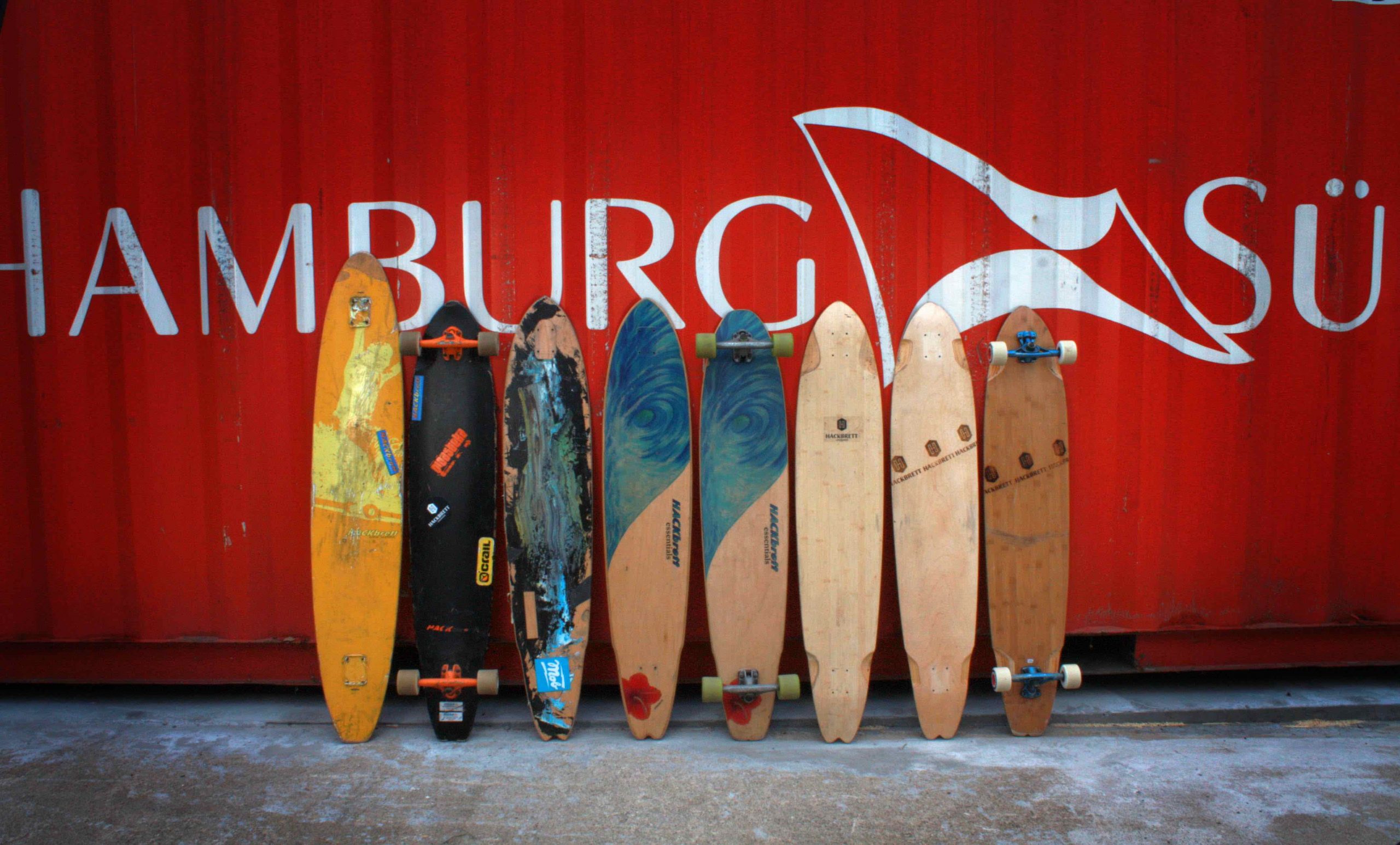 It’s a rare fact that a board is overhauled more then once or twice. As a matter of fact, I talked with the guys from Hackbrett Longboards about their longboard deck Wasser 5.0. The owner of Hackbrett who also shapes the boards, Hartmut “Hack” Olpp redesigned the Wasser for the forth time since its first release. As he says, “For me, the Wasser is by far the board with the highest amount of flow in our lineup”.
And yes. If you take a closer look at this 1.3 meters long monster longboard, you will probably feel the stoke. Hack itself calls the Wasser longboard deck “A board with a big portion of soul riding”, which it surely is. This unique and kind of a special board hardly fits any category and it should probably have one on it’s own.
I caught up with Matt Elver, a shaper at Hackbrett who is also on their team since 2010. He shared with me a really special insight on the “Wasser” history. Read through to find out more.

Matt’s insight into a history of the Wasser

For the reference, see the above photo.
That yellow thing on far left on the photo above was built sometime around 2005. The scuffs on the bottom are from it bottoming out whilst carving and cruising! Concave, no nose or tail –  the “Hacksurfer” 🙂 Not technically a Wasser but a predecessor that spawned the feel and ideals that gave birth to the Wasser as we know it today. Soul surfing!
The Gun was the first WNT (Wiegt Nix Technologie) from Hackbrett build in 2007, with hollow chambers milled into the deck. As you can see on the IGSA stickers, the whole thing weighed less than 4kg, with 130cm length and fat 200mm Crails!
The 200mm Anarchy Crails were Hacks “pro model” truck. He was 5th in the IGSA rankings in 2005. In 2007, he brought the Gun to the World championships when the IGSA rules said that no board could be longer than 120cm.
They changed the rules to allow him to ride the Gun, and the IGSA still allows boards up to 130cm. The IDF changed it back. I might have to see what I can do about that next year though.
It was the first board to have the concave that was later used in many other shapes, the Anarchy for one. The current Semmel also uses the exact same concave. We don’t sell tons of them, but those that ride it all agree that the board has a lot of soul.
The next 2 boards on the photo above are the same and produced in 2008. Wasser 1.0 I think! The painted one belonged to Horstl (Horst Prem, one of Austria’s first sponsored skateboarder, artist and creative mind from Salzburg). I never met him, but just heard crazy stories. He made this too: Skatemountain – so you maybe get the idea of Horstl!
Definitely a funny part of the Hacbkrett and Wasser history, though. The painted board was his and was actually lost for a few years, then found again under the miniramp at the old workshop in Lagerhausstrasse in Freiburg. Now it hangs on our skate history wall. The board itself had the wave graphic, the outline was updated from the Gun to have little wingers on the tail. Concave only, still no nose or tail.

The Hackbrett Wasser in action


The Wasser 2010 also had the wave graphic, seen here as a complete. Probably the 2.0, looking back, but it was called the Wasser 2010 at the time. Many of our teamriders rode this thing for their first introductions to downhill and freeriding – Alfred, Luke and Flu if not more. Dudes who went on to have incredible board feel. The update from the older version was the form, which was the first Wasser to have a kicktail and nose. It’s a slight spoon nose, really nice feeling and balanced for nose manuals. Luke rode this board the most and was widely considered the best/most flowy “dancer” in Germany. I have asked him for some pics of him with it, and will also see if he has any words to go with them, he is a really integral part of the boards development and history. The board is as a complete in the picture because it still gets ridden, 5 years old. Hackbretts last forever baby! Flu learned standup sliding on that exact board, even switch toes, and had his first taste of 80kmh on it too.
The Wasser 2011 is the next one. New construction, new concave, new graphic. Now with some camber and deeper concave plus an upgraded outline. This one had a logo milled in, but you can’t really see it. We did that for a few years before the new logo came. That logo you can see, we put on afterwards with a sticker.
The Wasser 4.0 was the first one with the diagonal Hackbrett burnt graphic that they all get today. Seen here in maple, its pretty rare, we didn’t make many with maple at all. Its not available anymore. The wheelwells were upgraded to fit the new technology and processes that we developed, and the construction was changed to allow the use of each different topsheet that we use today – maple, bamboo, nut, tepa.
The Wasser 5.0 is the one one I used at KnK at this years Cult Wheels Single Surviver Race. Just a few little but important chances where made. So Hack put the flex arrangement a little bit further to the back of the Wasser. Also he put the highest point of the camber a little bit backwards. Another change has been made of the back foot, as Hack broaden the outline for 1cm. He also added some pockets both feet and angeld the truck mounting +/- 3°, because a long wheelbase can handle steep wheel angles.
As you can see, a whole lot of thought went into it! And actually each development, and each Hackbrett shape had a whole thought process equally as long. Thats one of the reasons that we are building better boards than anyone else in the world 🙂 The construction was also updated to our new “KLK” (Koffer’s Leichtbau Kern). It rips. WNT (Wiegt Nix Technologie) variation is also available.

The Wasser is basically a longboard for thoroughgoing carving and with the truckmounting (+3°/-3°) the board feels really alive. No matter what terrain you are hitting, the Wasser is getting it done for you. Have a look at the official Hackbrett Wasser edit while the team is enjoying the board to their fullest.

For more information about Hackbrett and their boards, visit https://hackbrett.info/