Skip to content
Home » Uncategorized » Is The Downhill Skateboarding Scene In Trouble? 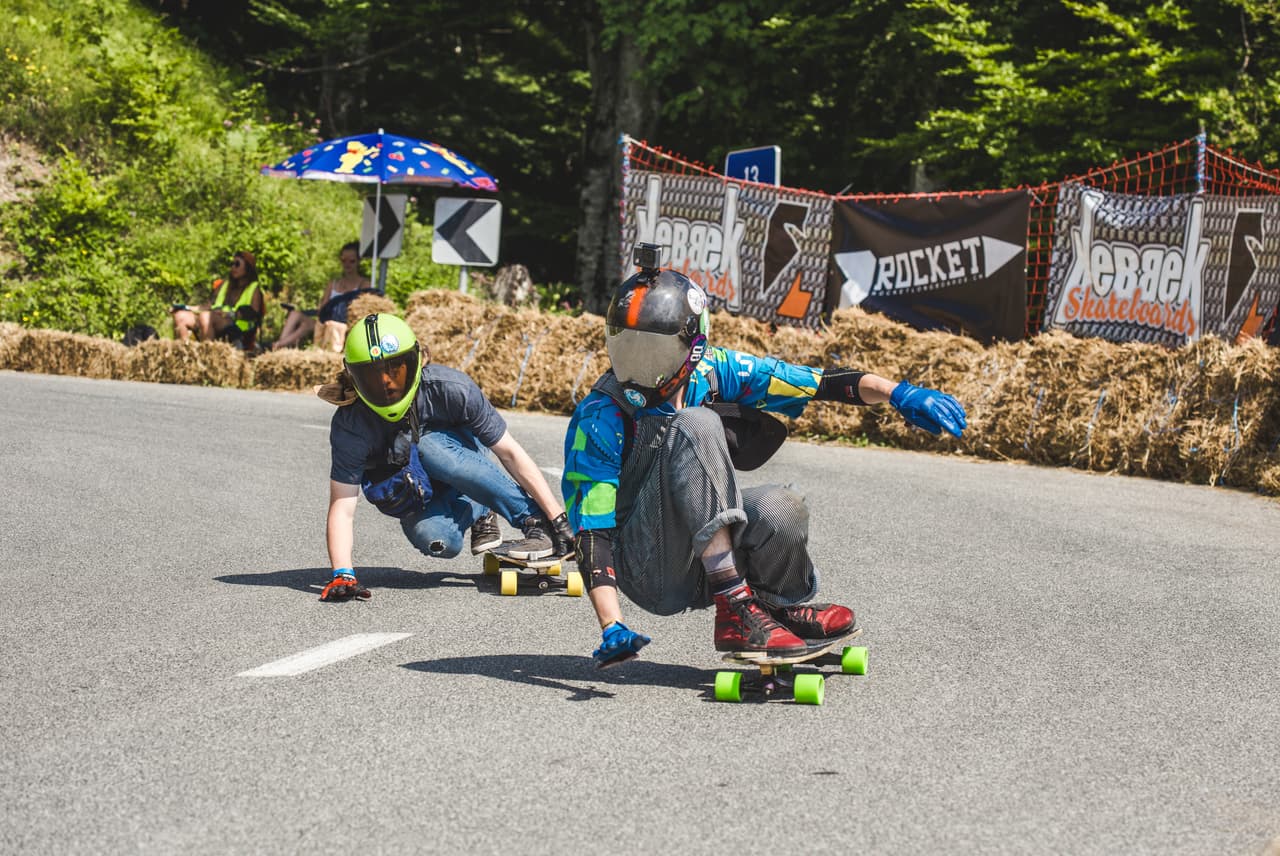 The last few years have been pretty tough for longboard producers and retailers. This year feels like we’re about to hit the bottom as the number of riders dropped to its lowest since 2009. Many businesses shut down because they simply couldn’t manage to survive on such low numbers and now the crisis has finally reached downhill skateboarding events.

During their Annual General Meeting, IDF (International Downhill Federation) reported a small growth in the number of their members in 2018. They had 1111 members in 2017 and 1146 members in 2018, which is only 35 members more. Compared to the total number of members, the small improvement is basically insignificant and also represents the smallest growth in the number of members since 2013.
Looking at the number of IDF members attending the races, there were only 78 more members attending the races. The improvement is again very small compared to the drop the events have been experiencing since 2015 when IDF had 1667 members and 1047 of them attended the races. To sum it up, compared to 2015, IDF now has around 521 members less and 429 racers less.
Last year’s incident at an IDF sanctioned race in Brazil, where a rider tragically died in a collision with a vehicle on the race track, seems to have affected the rest of the IDF races around the world too. So far, there’s only one rider from Brazil listed on IDF Kozakov Challenge riders list.

For as long as of 2009, Kozakov Challenge (Czech Republic) has been to racing what KnK Longboard Camp (Slovenia) has been and still is to the freeride scene. A little over a decade, these two events had led the scene by having the best organization, best racing track and attracting the biggest numbers of riders.
Other noteworthy events, like Alpenrauschen (Austria), Velefique (Spain), Gioasteka (Switzerland) followed closely but never really got to hit the big numbers like KnK Longboard Camp which was running as a two weeks long event for 10 consecutive years. In 2016 it reached a record attendance by hosting more than 450 riders from across the globe.
Recognizing the drop in the number of riders attending the events, as organizers of KnK Longboard Camp, we decided to reduce the event to only one week this year in order to avoid struggling to fill it up or potentially being forced to cancel one of the two weeks. The decision proved to be good since, at the time of writing this article, we have 228 riders registered for the event out of a 250 riders limit. The numbers are still good and we are more than happy but the current numbers show that the general number of riders reduced more than expected.
It looks like KnK Longboard Camp will once again count the biggest number of riders and while the target of 250 riders is not far away, there’s still a solid month till the event. It just might fill up.
However, Kozakov recently had to make an announcement on Facebook urging riders to sign up in case they intend to participate in the race.  This obviously shows that there are no riders around, otherwise, they would normally already register.
Currently, Kozakov’s riders list counts 128 riders and they are still far below their usual attendance at around 200 riders. Considering that Kozakov’s announcement came out less than a month prior to the event the timing is quite tight.
Another European IDF race, Transylvania DH falls short with only 31 riders currently listed on the IDF riders list. The organization of the Transylvania event also took a blow earlier this year as the two main organizers decided to split ways. In order to organize a quality event and provide with sufficient safety, more than 31 rider registration fees will be required, so we’ll likely see this event fading out in the near future unless they come up with the money elsewhere, like from the sponsors.

Do we need more events?

As the number of riders was growing in 2016, more and more people started organizing events around Europe hoping to make a few extra Euros on a side or even make a business out of it. Some organizers stretched as far as organizing 4-5 events in a season and not giving a damn if that’s maybe too much.
However, the bigger number of smaller, unsafe and not properly organized events will not likely do much for the scene but will bring it further apart as the riders stay limited to their local scene instead of connecting internationally as they used to a decade ago.
On the other hand, this is a good situation for the riders since they are able to attend the events by having to spend less money on traveling.
Anyway …

Looking at the event sponsorships, the situation becomes even more worrying.
Before we can continue talking about so-called “event sponsors”, we have to clear up one thing: Businesses are not “sponsors” at an event … They are “advertisers”. They pay for the exposure, the right to be present with their branding and to interact with the riders at the event.
Unfortunately, since longboarding businesses are run by skaters and not marketing wizards, they failed to recognize this throughout the whole decade. Obviously, they didn’t have to pay much attention since the sales where OK and nobody really expected the good times to end so suddenly.
Compared to other sport industries, longboarding brands always managed to get away by “paying” the advertising with goods by giving a few decks to the event organizers. Obviously, for a smaller event, everything they can get their hands on will come in handy, but for big event organizers who actually have to provide with big media teams and much more complex event organization, a few pieces of gear is basically not sufficient compensation.
However, there were and still are a few brands left who are actually paying some money for the services delivered by the event organizers but their involvement is getting smaller from year to year as they make up excuses like “We are a small company and don’t have money”.
To sum it up, instead of investing in the scene to help it grow and promote their business, producers and retailers are cutting their financial involvement even more which doesn’t help anyone. After all, who can blame them when at this point they are basically fighting for their own survival.

Will skateboarding at the Olympics save the day?

The hopes are now all-in on the Olympics, hoping that someday downhill skateboarding will be a part of it and the sales will pick up where they stopped in 2016 … But let me ask you something – Does it really make sense to take an effort and include downhill skateboarding while, compared to other sports, there’s basically only a handful of downhill skateboarding riders around the world?
Thanks to less investing and thanks to the declining number of riders in general, we might see even more events disappear in the upcoming years while those who manage to stay intact might raise their prices.

Who can we blame, for real?

While this article is not aiming to blame anyone for the drop in the number of riders attending the events, probably the only thing we can all blame is the generation shift we started experiencing during the past few years.
Those who started skating back in 2009 when the boom started, are now 10 years older and most probably have other interests in life like a serious job, kids and so on … In simple words, they are not skating as much as they did and one thing the event organizers started noticing is that they are not coming back to their events.
Instead, there are more underaged riders on the scene. They are still in schools and they are financially still dependent on their parents. Getting the gear, traveling to an event and paying the registration fees is a big expense that’s only growing from year to year. Next to that, one thing to note is that they don’t own driving licenses or cars yet, making it so much harder for them to travel around on their own.

What can we do now to make it better, you ask?
It will take a great group effort to get the scene back to where it was in 2016. The biggest events like Kozakov and KnK Longboard Camp will most likely continue running as usual but the advertisers will eventually have to step in or the number of riders attending the events will have to increase. Otherwise, the remaining riders might end up paying higher registration fees which could lead to the attendance to drop even further.
Rather than organising smaller events to continue breaking up the scene, it could be much better for local riders to organise classes and demo days in order to introduce new people to the scene.

2 thoughts on “Is The Downhill Skateboarding Scene In Trouble?”