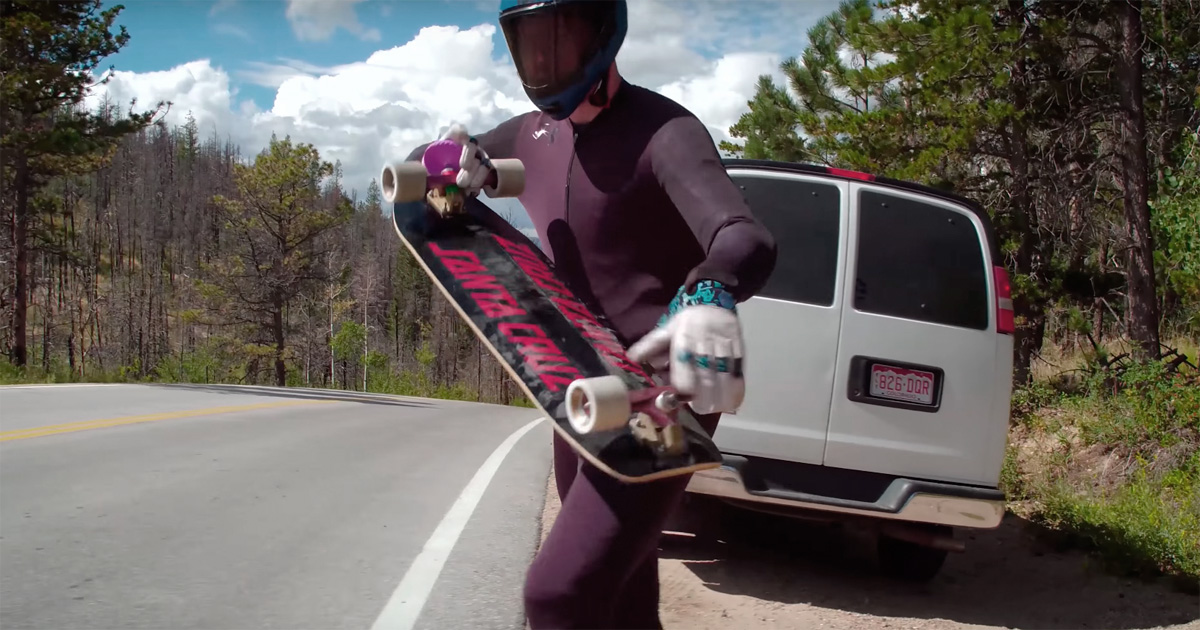 Just as the L’Ultime Descente race is about to happen tomorrow to set the new world record for various downhill disciplines, Santa Cruz Skateboards and Kyle Wester announced Kyle’s successful attempt to break the downhill skateboarding record by reaching the speed of 143.89 kph (89.41 mph).

I’m still trying to comprehend this because of the massive 13 kph difference from the previous record set by Erik Lundberg being 130.63 kph in Les Eboulements. I guess it’s hard to imagine matching that speed as the L’Ultime Descente track is only 1 km long and the top speed for downhill skateboarding stand-up is around 130 kph+.
The location of the road where Kyle did his run is unknown to the general public.

Check out the speed suit!

What is known and you can see in the video (or see the screenshots below) is that Kyle used some kind of a special speed suit he developed in order to be as aerodynamic as possible and to be able to achieve the maximum speed.

Erik Lundberg set a world record (WGSA) in Les Eboulements (Canada), documented by Red Bull in May 2016. His descent was measured at 130.63 kph and with going faster by just 0.55 kph, he managed to beat Mischo Erban‘s record of 130.08 kph, witnessed back in 2010 on a road in Colorado, USA.


But Erik Lundberg’s speed record is not safe anymore, due to a new three-day event happening tomorrow, where 100 downhill skateboarders will try to beat it.

Until now setting new speed records was kind of a private endeavor with just the athlete and officials recording the stunts and preparing the documentation required to obtain the title.
L’Ultime Descente welcomes locals and visitors to Les Eboulements to witness top line downhill skateboarders, street luge skaters, in-line skaters, and soapbox 2.0 drivers, descending down this legendary road.
The event will take place this weekend, from September 9th till 11th. During the time of the event, the road will be closed for traffic every thirty minutes, where riders will be able to do their run from 8 am to 18 pm.  For more info follow their Facebook event page here.

So far we haven’t noticed any public riders list, but we’ve done some research and Erik Lundberg is flying in to hold his record, as well as Max Ballesteros, Pete Connolly, Emily Pross, Adam Persson, and Mauritz Armfelt, just to name a few…
To give you a taste of the drop, here’s a photo showing the top speed section.