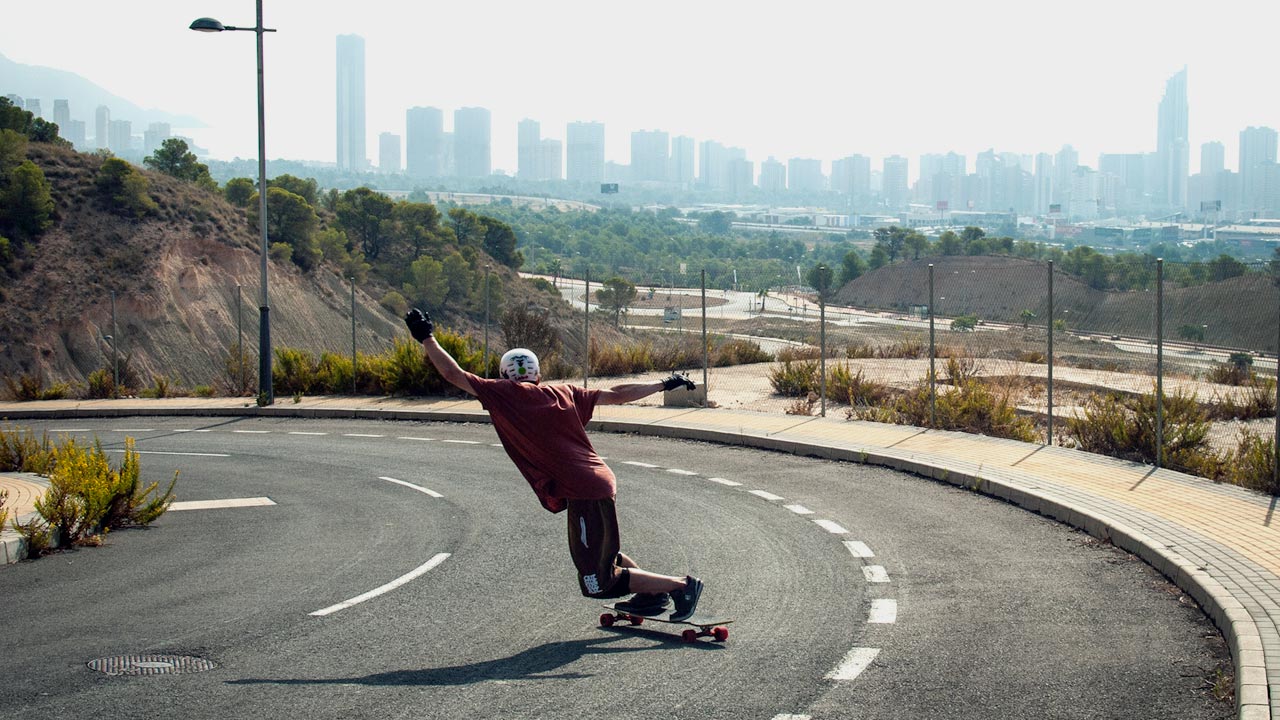 To survive the winter, a squirrel needs to stack about ten thousand pieces of nuts, acorns and pine-cones before the first snow hits. Tough life.
In general, as skaters living in a country where the weather is seasonal, sometime around the first autumn signs we need to think about charging our batteries to the maximum, just so we can survive winter.
Last year we came up with an idea to visit Spain and guess what, it was a straight bullseye. Without even the slightest hesitation this year early in April we started planning our next trip.
In 2015, Pablo Quiles, a well-known rider from Spain, showed us the ins and outs of Gnarlicante. So basically thanks to him, we now know the spots, local riders and the Spanish way of living.

Getting ready for the trip

When getting ready we tried to plan everything ahead so that nothing would surprise us and we could stay as low profile on the spots as possible. It’s very important for us to respect the spots and local riders that use them on daily basis.
Fortunately when it comes to the whole planning phase, we have a ruthless engineers Bartosz who doesn’t leave anything undone. So by the time we were leaving Poland, our map of roads we wanted to hit looked like a globe used as a shooting target for close range shotgun practice.
We had that covered. To get other things done we got in touch with David Butti from Salsito House. He offered us to stay at his home, helped us with the rentals and overall was an awesome host the whole week once we got to Spain.
I can easily skip the whole ‘omg excitement phase’ with the packing, the flight, the whole clapping after landing and the fact that we could easily throw our jackets to trash because of the 29 degrees in Spain, while in Poland people had to scrub windshields of their cars in the morning.
This year we managed to smuggle into Alicante the whole STWS so there were 7 of us. Next year we probably will bring our families and pets and in two years’ time we will most likely come back with all the crap we own and stay for good.

All jokes aside Spain has so many beautiful spots and such a unique climate to offer that I myself sometimes didn’t know wheatear I should laugh or cry, so I cried with happiness and enjoyed the trip as much as possible.
We had an ambitious plan to “skate all day, everyday”’ and to test the heck out of the new improved core mounted in LOBO wheels. In fact we calculated that in one week we should be able to pull around 12 skate sessions, counting the Gnarlicante King of the Hill Outlaw Race and Castell de Castells freerides.
The plan was simple…
Wake up, hit the market, eat at the spot (which I really like), skate, lunch somewhere at the beach, skate, dinner, relax, sleep, wake up and repeat.
Sounds a lot but to be honest, if the weather wouldn’t prank us for a day or so, we would most likely pull it off. Nevertheless, we still got tons of riding done and left behind loads of burned urethane.
Alicante is a region that offers hundreds of spots you can skate on.
I literally write hundreds because it’s true. Most likely if you’re a local rider 98% of the spots is invincible for you, but as pure “flatland boyz” we were stoked.
Of course in a weeks’ time we weren’t able to hit all of the spots we saw but we did the best we could playing it smart enough not to burn anything for the locals.
In my eyes Alicante region offers everything. From 30% grade slide spots, through awesome roads with small traffic to pure open road freeride experience with all kinds of other attractions.

So the whole week went by excellent.
During the day we were skating, having fun, stacking clips and snapping photos. Evening on the other hand we spent either relaxing in Salsito or just roaming the small town of Calpe, enjoying the late night life of elderly citizens. I’m telling you, it’s the Miami of Europe.
Fortunately the photographic equipment we took this year for the trip also levelled up, so thanks to the gimbal, a sweet GH4 and a handmade car mount, we were able to record many runs.

King of the Hill Outlaw Race

On the 14th, the Gnarlicante crew organised an outlaw race at on of their local favourites, a spot called “Psychospot“. This name actually comes from the one and only Pablo Quiles, who’s nickname is Psycho, so if you know Pablo or at least seen him skate, you get the drill about the spot.

The road itself does not forgive mistakes and brings genuinely tons of fun. Most of the surface is destroyed in one way or another. From huge cracks and random concrete humps to fairly large holes leaving just a small pass to go through. Add over a dozen degrees of grade plus a few corners and you got yourself a pretty interesting mixture.
I asked the locals why they love the spot so much and heard that the pavement is just perfect where it needs to be and the rest is just details. Frankly, that’s true but I myself think that besides that, Psychospot also offers tons of adrenaline and almost no traffic, plus the guys block the road while bombing.

So, we skated a bit over there. Melvin Herrmann helped us with recording a run of Rafał and we moved on to another road to shot some more footage.

Eventually Melvin Herrmann was declared The King of the Hill by winning the outlaw race, which is well deserved since he is an awesome skater and also by the way has freaking mad driving skills.
Toti Bicileta was second with Adrian Leon Suñol coming in third and Oscar Archibaldo Rodriguez Escoin swooping the fourth position riding on the new LOBO Kraken Downhill series wheels.
During the Friday outlaw race we’ve run across the guys from Netherlands, Robbert and Jordi, with whom we already had a chance to skate at KnK in the past and at Castell de Castells freeride the next day.

As I mentioned before, for our last day in the longboard paradise we decided to visit Castell de Castells freeride event organized by the guys from FreeDivision Crew. The freeride was a full weekend event but because of our flight we only attended the first day.
Castell de Castells is located in the mountains of south-east Spain. The town itself is very small and only has around 500 residents, but the freerides were organised on a public road connecting it with the next city.

When you look at the spot on findhills you might not be impressed because it’s only an average 6% grade, nearly 16% steepest point, barely 3 kilometres and just a few corners and sweepers but the point of view changes once you get inside that shuttle bus.
Believe me, it’s awesome. The whole course is not very demanding but you build up speed fast, the road is wide, the pavement is smooth and the corners are crazy-steep. What more could a skater ask for. We took some photos, had lots of fun and went back to Salsito with no losses.

Overall we had a great time!

We did everything we wanted to, including a very hard test of the new and improved cores in all models of LOBO Wheels, which by the way turned out great.
We filmed a lot of clips and snapped some photos to share amongst friends and homies but what is the most important thing, we got to skate with cool people, had a lot of fun and charged our batteries to help us survive the winter break.

Big thanks to David from Salsito House, who once again welcomed us in his home and proved to be a great host and thanks to Melvin for helping us record a sweet run of Rafał on Psychospot.
I’m pretty sure we will come back next year because Gnarlicante still has so much to offer and it only gets better and better.
Skate safe and have fun!
Tymon
Visit www.lobowheels.com to check out the whole longboard wheels lineup and visit Lobo Wheels on Facebook for newsfeed and everyday info about the company.
To follow all of our adventures check out my personal blog North of Poland and follow it on Facebook.