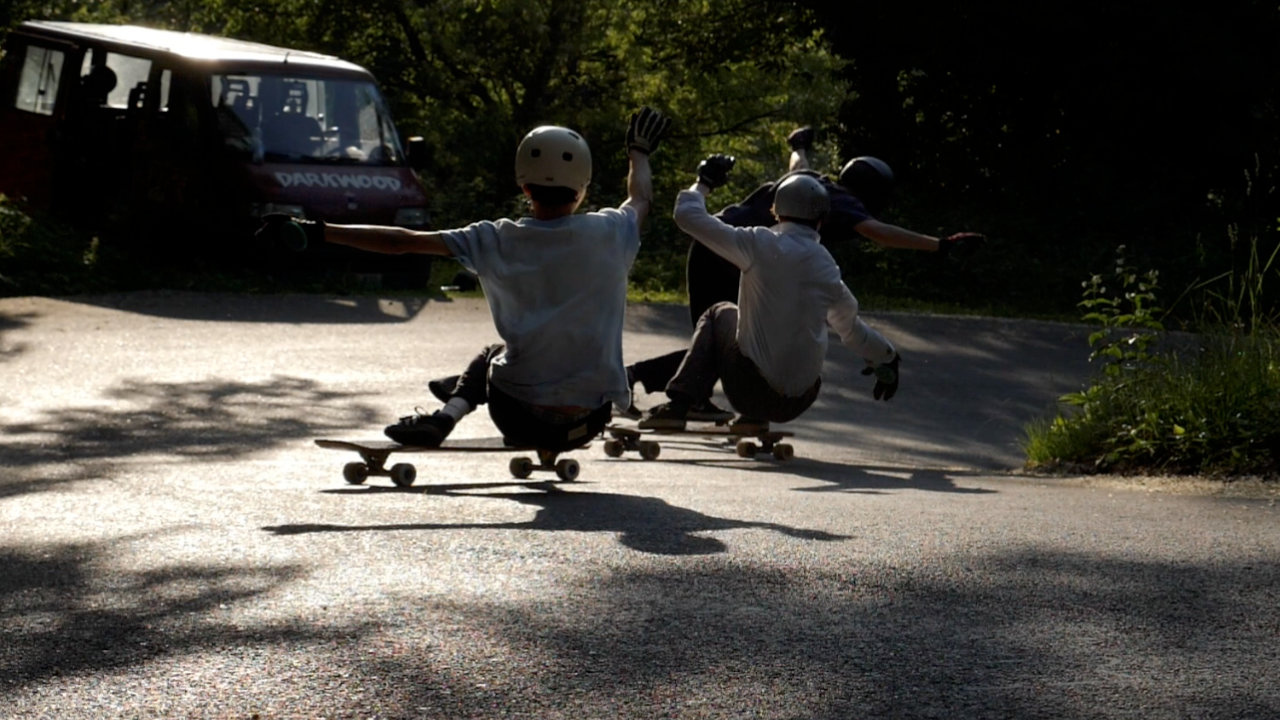 Last week we had the pleasure to host two rad skaters from the Banana Longboarding crew; Jakob Grasmann (Moonshine MFG) and Philip Tankarian (Layback Freiburg Skateshop). Together with our local shredder Benjamin Sabol (KebbeK Skateboards) they spent three days banging some of our sweetest home spots.
Jakob’s and Philip’s original plan was to travel to Italy but for some reason that didn’t work out and they decided to visit us instead. We were stoked to hear that they would like to spend some time with us and discover what else Slovenia has to offer besides the Bear’s Guts.
Only a few days earlier we acquired a new Panasonic Lumix GH5 camera and this was a great opportunity to do a few test shots with some great young talent.

Watching Benjamin skate with Jakob and Philip was really something special and I know that he was extra excited too because usually he doesn’t get to skate with other people that often besides myself. Slovenia has a very small downhill skateboarding scene.
On the first day we hit one of the steepest hills in the area to warm up. Short run with seven corners, the smoothest pavement around and a 22% grade made a great first impression on the guys.
We played it safe and skated with the radio stations. That provided some extra comfort and a sense of security, so the runs were fully sent one after another. The guys totally ripped it.

After a bunch of drops we moved to another spot in the area where we stayed until the sunset. Compared to the first one, this spot has pretty much the same surface but it’s less intense. The guys liked the more relaxed runs as the first spot took its toll.
In the evening, we were pretty smashed; the guys from skating, me from filming and driving, Nadia from taking photos and our dog Era from the heat. It was a great day but we were even more excited about the next day…

The next morning we took off a bit earlier so that the guys could skate a nice mellow run for a couple of times and warm up before hitting the 8 kilometres long mountain road we had scheduled down on the coast.

It’s needless to point out that they enjoyed this spot the most, but I had to anyway. Narrow as f***, smooth surface and top speed close to 70kmh. This track is the No Man’s Land’s “smaller brother from another mother”.

As the traffic started picking up at around 15 p.m., we stopped to film on one section and once we were done we moved to a spot on the other side of the valley.

Steep repaved and banked hairpins with a smooth tarmac were just perfect for getting a couple of shots during the “magic hour”. You can see that in the video as well…
The forecast for the last day was not so great, but we decided to give it a try anyway. We felt lucky as only half of the country had rain, so we just decided to go to a spot which was in the other half, but as soon as we got there it started raining.
Jakob and Philip had to catch a bus in the afternoon and we only had 3 hours left to skate. I took a look at the “rain radar image” and was happy to see that it hasn’t been raining on a spot which was only half-hour drive away.

It was a spot that I had marked to checkout for a while now, but never made it there. Once we arrived, the excitement went off the charts. The road was dry and packed with steep drops into even steeper hairpins with some sweepers in between. A real gem.
The guys had some runs there and I got another chance to tryout some new shots and angles as seen in the video…We couldn’t get enough of it so we ended the session fairly late but we managed to get to the bus just minutes before it left.
So yeah…We had a great time together and it was really nice to hang out with Jakob and Philip…I hope that they will return sometimes soon. If not, we’ll meet at KnK again anyway 😉
Peace out my brothas!
Riders featured in the video
Philip Tankarian (Layback Freiburg Skateshop)
Jakob Grasmann (Moonshine MFG)
Benjamin Sabol (KebbeK Skateboards)
Film & edit
Mihael Zadravec (Longboard Magazine)
Photography
Nadia Hozić (Longboard Magazine)
Music
FM Attack – Sleepless Nights