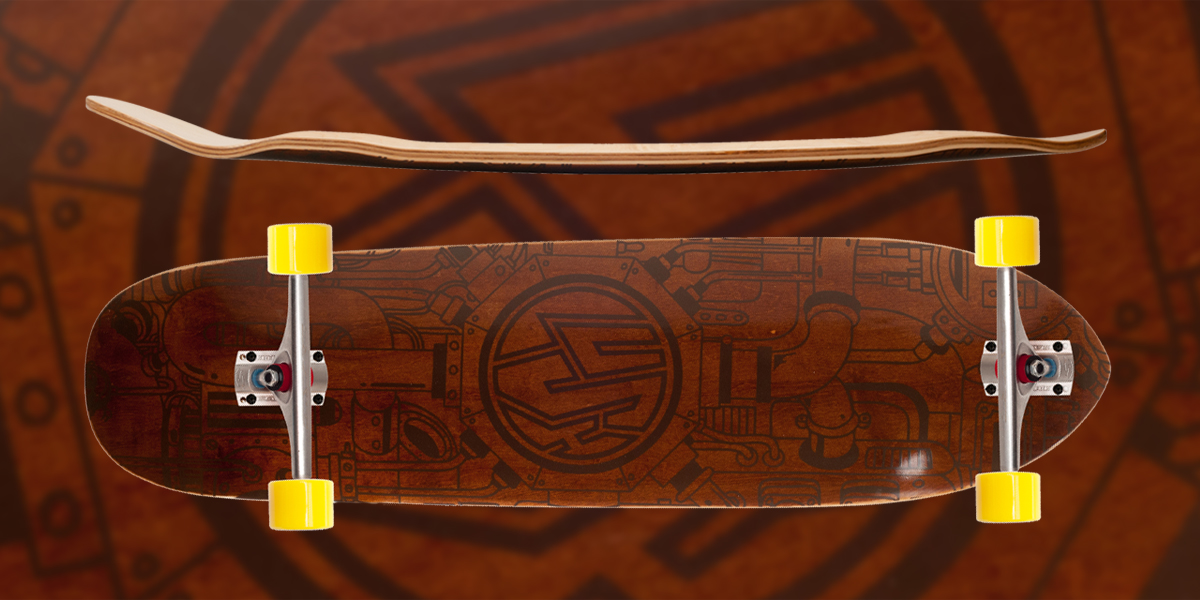 It seems like ages since Lush Longboards released the first version of the Lush Machine, one of the most popular decks in their collection. The almighty Machine was built to make you skate everything from grinding ledges, trashing the city, freeride and bomb hills. You name it. With the Machine, sky is the limit.

Since the first Machine prototype was introduced in 2011, we’ve seen two versions of this board.

Just in time for Santa to drive by and pick it up for you, Machine’ third release was introduced in late November this year, upgraded with some ass whooping 3D concave and slick graphics done by Jethro Haynes. Ladies and gents, we give you the Lush Machine 3D!

8ply wooden core built of Canadian Maple makes the Machine 3D stiff and strong. It will take everything you might throw at it and it will endure all your shenanigans for ages. The adjustable wheelbase option (front and back) is still there offering a range from 62cm to 64cm (24.54″ – 25.3″) so you can tune in your setup perfectly. The deck is 97.7 cm (38.5″) long and 25 cm (10″) wide.
While the previous versions of the Machine featured dual TKP/RKP wheel wells, with the Machine 3D release these are dropped out thanks to its three dimensional concave and flared wheel wells which allow for a solid foot lock as well. There’s enough clearance to fit both truck types and various wheel sizes.

Machine 3D features a much more subtle shape than its predecessor as the 3d concave gives you the feel from the rail of the board rather than the shape of the deck. This appears to be much more of a classic shape than Lush has done in the past.
Big fat fully functional kick tail measures from 164mm to 173mm (6.45″ – 6.82″), depending on your preferred wheelbase option. It will make popping an Ollie a breeze.

Lush Machine 3D is a favourite choice of uber chilled team rider Jooz Hughes (@jooz_vandem_hughes). You might have had some runs with him already at some of the Europe’s events. He’s that dude always bombing hills in his signature baggy sweat pants steezin’ the f*** out of them. Recently he’s been over at Gnarlicante, skating and filming with Pablo Quiles taking the Machine 3D to the edge and over it, just to double check that it’s ready for the release. He totally approves it. Check out the video.

The machine 3D is my dream shape , we have been playing around with different shapes of the same mold for a long time. I am really interested in how just changing the outline of the board can effect the way it handles and rides . I believe now with a longer tail than the chopper 3D and shorter nose improves the weight distribution on the deck , this makes it feel more balanced during sliding and for ollies. And also when you skate in switch everybody knows. The construction is spot on and the price range is perfect for all skill levels. The graphics for 2016 are a really nicely done, these decks look much more sleek and simple with more natural colours . All in all I love this deck and is my go to board. ~ Jooz Hughes

Love for skateboarding, tireless deck development and unselfish support of the communities, events and skaters, made Lush Longboards become one of the most beloved brands in Europe.
Check out their website at www.lushlongboards.com>.