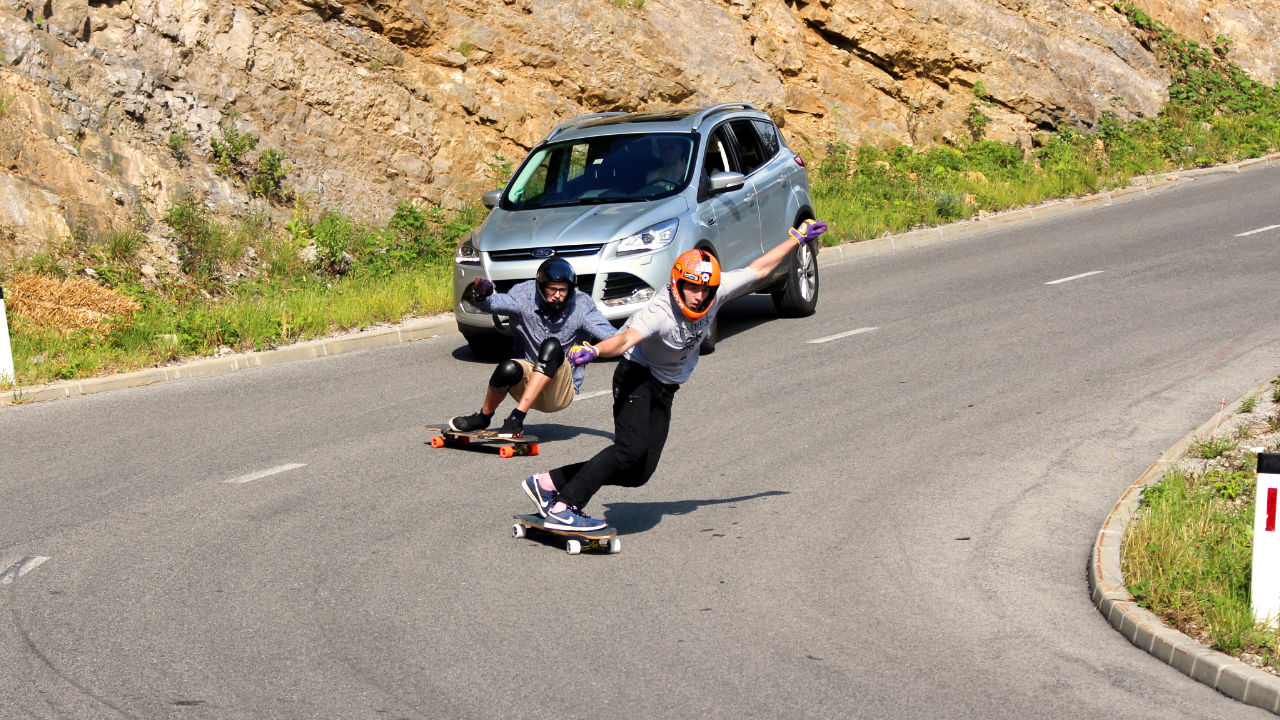 Wouldn’t it be great if you could make money doing what you love the most and to be able to keep doing if full time instead of your boring 9-5 job? In this post, you will learn how to cash-in your longboarding videos and live a life of a pro rider without even having a sponsor.

But wait…Isn’t skating for money a bad thing?

Some time ago, if you wanted to cash-in your skateboarding activities, people would quickly get very judgmental and often you could hear some saying “He’s in it just for the money!” as if that’s a crime or a very wrong thing to do…
You know, as if that person who’s trying to make money with skateboarding actually hates skateboarding but he or she does it just to get some money out of it. So much BS.
However, nowadays there are more and more riders who want to get paid for the footage they capture in order to be able to travel even more, attend more events and heck, why not try to make a living out of it as a pro skater.
To get out on the mountain, skate and film it, you had to spend time and money. So why wouldn’t you get at least some of the money back and refill your wallet for another trip or an event registration fee?
There’s a bunch of riders who already make money with their longboarding videos, you probably know them in person as well…
There are more ways to turn your video into cash but in this post, you will learn how to make money with your longboarding videos by licensing them to companies that specialise in distributing a user-generated content.
If you are a sponsored rider, I will also give you some hints about how to promote your sponsors in those videos and make it work out great for everyone.

Jukin Media is a company that specialises in distributing a user-generated content and it is a company behind some of the world’s most popular channels like People Are Awesome, Fail Army, JukinVideo and The Pet Collective.
If you have a cool video they will distribute it, monetize it and share the profits with you.

To get started with Jukin Media all you have to do is create an account on their website and submit your video. If they like it, your video will be added to their online library where it will be available for licencing to media professionals who are searching for great videos.
Jukin Media will not buy your video. You remain the owner of the video and you only give Jukin Media the rights to represent and manage your video on your behalf.

So, how will your video actually make money?

Jukin Media will try to turn your video into cash by licensing, syndication and YouTube monetization:

How much will you earn with your video?

It’s hard to say exactly how much you will get paid because that depends on the variety of factors, like how long will it be used, where it will be used, how it will be used and so on…
To see how much Longboard Magazine would have to pay for one of the downhill skateboarding raw runs available in their library, I sent them an email asking for the price.
They replied the same day and wanted me to further explain where and for how long I will use the video…I explained that the video would be uploaded to our YouTube channel, Facebook page and get featured on our website and remain there indefinitely.
This is how video distribution usually works in longboard industry, right? A sponsored rider creates a video and then sends it to his sponsor who then posts the video on Facebook, their YouTube channel and maybe their website/blog.
The next day I received their reply and they offered to license me the video for 1.600,00 Euros.
So, considering that Jukin Media will share 50% of that revenue with the owner of the video, he would make 800,00 Euros.
I wonder if your sponsor would pay you that kind of money 🙂
But this is only one scenario…Your video could be licensed to a TV show featuring action sports videos and it would, for example, be used only once for a short period of time.
In that case, I guess the price would be much lower. According to what some riders have made, my rough estimate is that the price in this case could be around 300-500 Euros. The owner of the video would again make 50% of if, somewhere around 150-250 Euros.
* Please note that this is just what I think your video could make. It could be less, it could be more.

Of course, if your video is low quality or boring, nobody will be interested in watching it.
You will have to make sure that your video stands out by showcasing some kind of funny,  dangerous or outstanding performance, high speeds, beautiful scenery, awesome tricks and dance moves.
The general population is intrigued by crazy downhill skateboarding videos these days. Big media companies know that and they want to include this kind of content in their program in order to get the views, followers and to provide a popular content to their audience.

How to promote your sponsor in your licensed video?

We are used to putting sponsor logos at the beginning of the video, which is a bad idea anyway…If you want your video to be licensed, you should avoid any logos in it.
Think about it; Not everyone is an idiot like we are at Longboard Magazine and the broadcasters will not promote your sponsors for free like we do.
So, make sure that you upload a version of your video without the sponsor logos.
The same goes for the music. As usual, riders just steal some popular music and put it in their video. This is of course not allowed and you should upload your video to Jukin Media including copyrights free music or no music at all.
So, how do you promote your sponsor in a licensed video if you can’t put a logo in it…
That’s easy…Wear a t-shirt or a sticker on your helmet. Get creative and have your sponsor showcased in a different way. Maybe your video footage can include a closeup of the product (boards, wheels, helmet, gloves etc). You’ll figure it out, I’m sure.

Who is already doing it?

Some of the popular names are already on it. Here are some of them…
Seismic team rider Javier Tato recently uploaded his video from Nueno freeride and in a matter of days, it was featured on People Are Awesome.
A Loaded Boards ambassador LoTfi Lamaali – WoodWalker is also a regular uploader and recently a young ripper from US, Josh Neuman, bragged on Facebook about making a nice amount of money via Jukin Media as his Bails video got aired on TV.
Among others, like Andrei Churakov, there’s also a fast and tight run by Ambroise Trt which we also featured on Longboard Magazine.
These are just some examples, but you can sign up and see the rest at www.jukinmedia.com.

How will your sponsors profit from your licensed video?

They will not. The thing is that these videos are mostly shown to a large audience which actually doesn’t care about longboarding brands or about you for that matter.
Your sponsor’s Facebook page will not get millions of new likes and their business will not skyrocket. As the matter the fact, hundreds of thousand fake Facebook views will get them maybe a couple of new followers.
However, who knows…You just might be discovered by the next talent hunter and get featured on a television or perhaps even score a trip overseas…
That’s it! This post stretched out far enough to give you an idea how to cash-in your videos.
As mentioned earlier, this is just one of the ways of making money with your videos and I will share some more as soon as I find the time to write them down. Be sure to subscribe to our newsletter or follow our Facebook page.
So, will you give it a try and upload your video to Jukin Media?
Peace out brothers and sisters!
Cover photo by Mihael Zadravec (Longboard Magazine)
Riders on the cover photo: Ruben Loosmore & Arthur Friedrich Schmidt