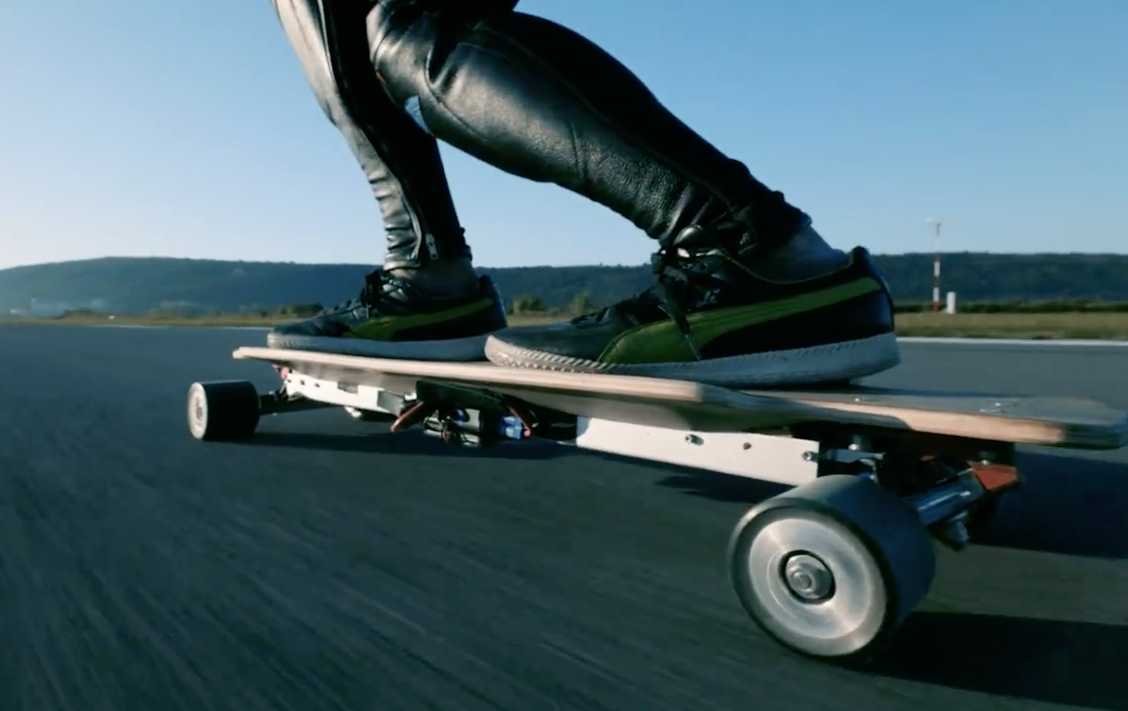 Lately we’ve seen many electric skateboards hitting the markets worldwide. Without any doubt, I think that they do have a bright future as a form of a “green” and a fun way of travelling around the city.
While other electric skateboards developers and manufacturers focus more on achieving longer distances by limiting the maximum speed and power of their products, NGV – Next Generation Vehicles from Slovenia decided to take it a completely opposite way.

NGV’s Next Board electric skateboard is still in a development stage and it doesn’t look as nice as some other similar products, it’s look definitely needs some more attention.

It features 4×4 in-wheel drive, which is not so common with other electric skateboards. Powered by a 6-cell lithium-polymer 22.2-volt 8,000-mAh battery pack located under the Murksli deck and controlled with handheld remote, Next Board can reach up to 15 km with a moderate speed. Comparing to other e-skateboards which fully charged usually reach a distance of up to 40 km, this might sound as a bit “too short”, but this issue is definitely something that NGV team will address soon enough.

According to Toni Dernovšek (Next Board developer), Next Board should be available in 2 or 4 wheel drive and different power options. Final price of the product will depend on it’s components, such as trucks, deck, battery capacity etc. Price range will be somewhere between 1.500 – 4.000 eur, depending on the model.
He says, that their electric skateboard was not planned as a transportation vehicle but more as an upgrade to existing professional skateboards. Their vision exceeds the usual use of electric skateboards as they want to see it being used for competitions in all kinds of skateboarding disciplines, such as downhill racing, slalom, freestyle and similar.

The most powerful electric skateboard

While it doesn’t have the looks and the longest distance reach it sure is a beast when it comes to the power and maximum speed which you can pull out of it.

I had the chance to try it out in the beginning of this summer, probably hitting somewhere near 50 km/h – apparently it was set to only half of it’s power. Very impressed with it, I would brag about it to my friends telling them that this board will race with the speed up to 100km/h. A common sceptical reaction was; “Yeah, right…”. Not long after, NGV announced that they will try to set a world speed record with their electric skateboard.

NGV hooked up with Mischo Erban (Guinness world record holder for fastest speed on skateboard), confident that his downhill skateboarding skills are going to help them accomplish a highest score possible. They were right.

It was supposed to happen today, on Thursday 29th, 2015, but due to a bad weather forecast they decided to do it two days earlier. This timeline change resulted with some of us not being able to be there and witness the event which was held on Portorož airport in Slovenia on Tuesday, 27th.

Apparently, a day earlier the top speed Mischo did on the Next Board was 113 km/h! However, on the official measurement event the top speed was 95,83 km/h. There you have it, officially the fastest electric skateboard! Congratulations to everyone involved 🙂

Electric skateboards are still skateboards, but they have very little to do with the “sport” which we love so much – downhill skateboarding. While some people are passionate about such tech upgrades, other think that they downgrade the essence of skateboarding.

Is electric skateboard something that you would use or would you rather keep on pushing? Leave a comment, tell us how you fill about it.