Skip to content
Home » A Cup Of Stoke » The Power of Sharing – Building a bowl in Lombok, Indonesia 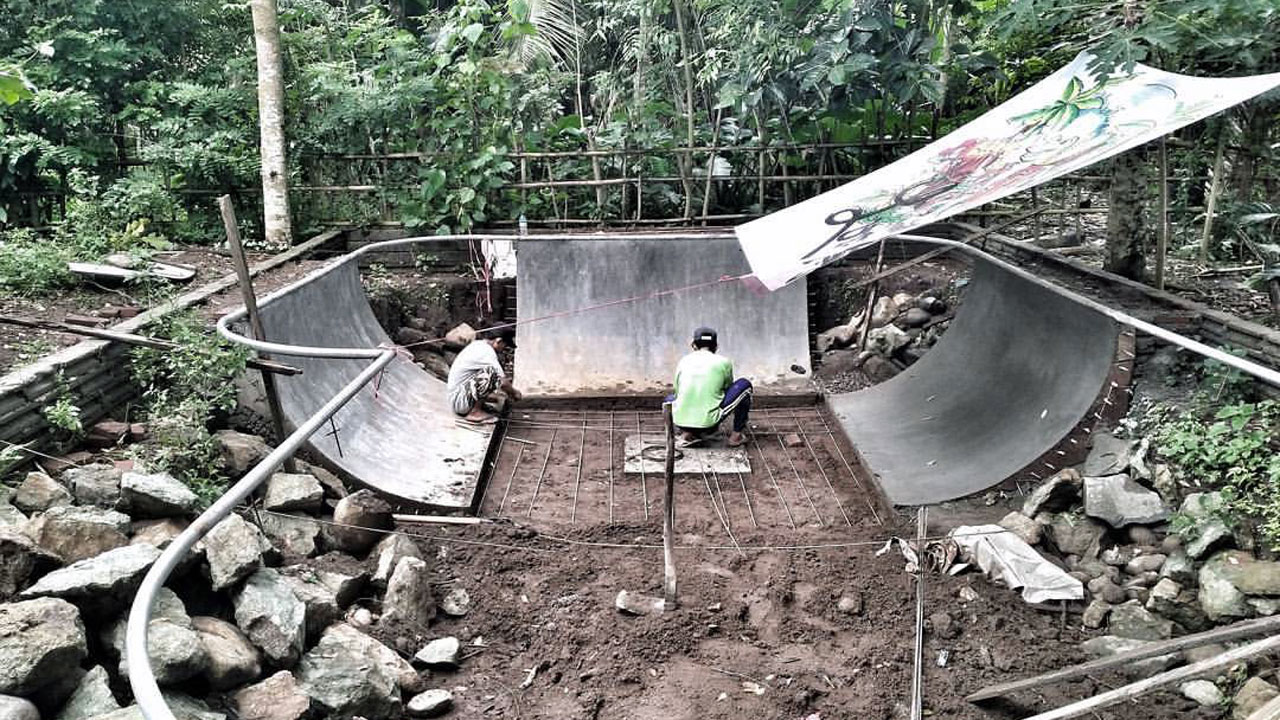 Wherever you go, there´s always somebody with a dream. However, sometimes there are only a few chances to turn someone’s dream into reality. “Sharing is the best way to make the chance bigger” said some friend to me while we were chilling in a small bar.
This is his experience with his dream of supporting skateboarders building a bowl in his home country Indonesia while living in Germany.

He collected old stuff from his German friends and tried to sell it to make money for the bowl´s construction and send the rest that couldn’t be sold to Indonesia.
He tried, but failed. Bureaucracy and distance made it impossible. He tried again, but the results was still not satisfying.
He was sad, but with every trial and tribulation, he started to become aware that he is not alone out there, and that there would always be someone to help realise his dream. Someone he just had to find.

Eventually he met this person. Her name is Dina.
It all started with a jam session in a small park. Then they became friends, spending every session on the hill together, talking during the breaks in which he told her about his country, until he finally revealed his dream.
After he’d shared the project and she got involved in the workflow, everything went well.
She did anything possible to raise funds. She sold her BMX, skateboard, longboard stuff & spare car parts and collected donations from local longboard businesses, like quinboards and Concrete Wave Cologne skate shop.
She collected anything from friends and her family that she could sell and of course she was asking for donations in several events like ISPO, Insul Race, etc.

Even her grandmother chipped in with some cash. Grandmas are the best. We know, it is not easy, it takes time, effort, patience and loyalty, things that I experienced, though not comparable to what she did.
One time she complained to me, “This sucks! I’m trying to sell a set of used wheels for 5 Euros, but prospective buyers still try to bargain the price by asking me : Does the price include postage?” Though life.
But, she kept doing it!
So, finally,  with the help from a local skateboard pioneer, Ozzie Anwar, who gave his land for the bowl location, the constructs started in the end of 2016.

Amazing.
Since then, he named the project “Project Love”. Just because she has done and still does everything based on love. This will be her third time to visit his country. Still with the same mission. To show her love for Indonesia and the local Skateboard scene. She´s on a special mission to finish this Project.
After hours of talks & glasses of beer, he ends our conversation with wonderful words, “Dreaming & sharing are two things with which everybody in this world can accomplish any task, no exceptions. So keep dreaming ‘n sharing it”.
So, I share this friends story to you all, to inspiring all of us. Share it, if you’re inspired 🙂
For traveller who’s gonna visit Indonesia, the bowl location is in Lombok, anyway, come over feel the warm people on the hot island!

“I’m packing my bags for the trip to Indonesia and taking 1630 EUR with me! Folks, you’re awesome! Thank you so much for any donation, each wheel, anything you bought from me! For one year I’ve been selling any kind of stuff and all together collected 2494 EUR and had the pleasure to deal with kind-hearted and some pretty dimwitted buyers as well. Now the bowl not only is getting done, some money will be left over and a roof or something else supportive can be built as well.
One question I don’t want to hear anytime soon Did you send the package already? I definitely need a break from selling. 16th March is starting time, pictures will follow. Last but not least, THANKS!”