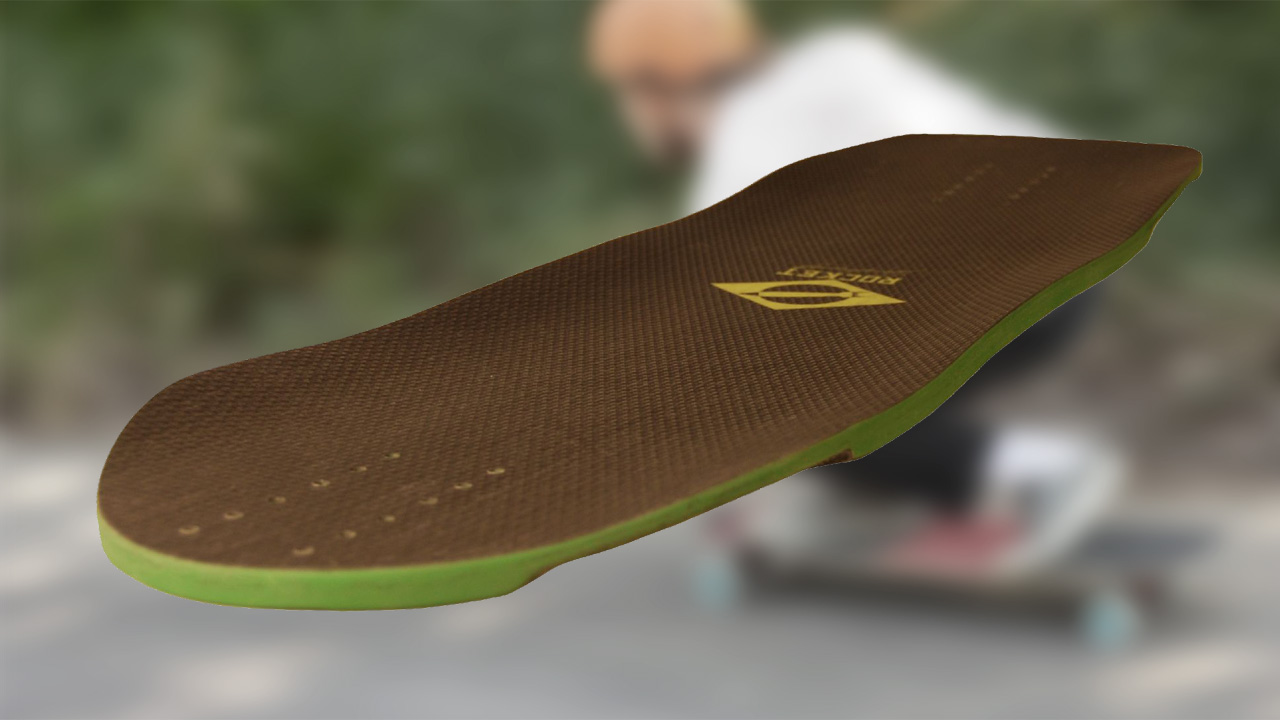 The rumours are true… Ian Freire from Brazil, the 2015 Red Bull No Paws Down champion joined the ROCKET Longboards team and scored a pro model deck designed completely according to his requirements for downhill and freeride.
The Ian Freire pro model deck is built with ROCKET’s new ridiculously strong LAF technology which makes this board extremely durable, waterproof and weigh only 1400 grams (3.1lbs).
As Ian shared with us, he always wanted to design his own deck and already had plenty ideas on his mind when at the end of last year, Daniel Iseli of ROCKET proposed the collaboration.

With mixing my ideas with Daniel´s knowledge in board construction, we managed to come up with a decent design to make a prototype.  I was stoked about the prototype, but when I saw it done with the LAF technology, I was blown away. This board is a game changer!


The Ian Freire Pro Model deck is 35,4″ long and has a directional shape, while its standing platform is symmetrical in order to provide the same stance and the same leverage regardless of the direction the board is facing.
The lucky future owners will be able to choose from two width versions, 9.8″ and 9.2″ (slim), while both versions feature a progressive concave (16mm to 12mm), flared wheel wells and a rocker.

With wheelbase options ranging from 23″ to 26″ and a kick tail, the Freire Pro Model deck is promised to deliver not only on the hill, but all around as well.

I would recommend this deck to everyone that likes to skate all kinds of hills, freeride or downhill, and want to do it all with one board. With a perfect size to freeride, flared wheel wells and a symmetrical platform, it’s the perfect board to do some stand up slides, but it is still big enough to go really fast. A mellow kick tail provides a really big pop on the smallest wheelbases.

ROCKET continues to evolve its production and is proud to introduce the indestructible polyurethane rails, which make the board highly resistant to impact.
The ultra durable polyurethane rails also seal the wooden core sandwiched between carbon fibre sheets, making it waterproof. As you can see from the photos, the carbon fibre is visible through the embossed 3D top sheets complementing the board with a badass look.

The production of the Ian Freire pro model is more time consuming, which justifies a higher price tag. The price for the deck is expected to be 269 Euros. Considering that it might last practically forever, the price doesn’t sound too big anymore.
The Ian Freire deck will be available for purchase in midd March via their current dealers.

Since he started manufacturing longboards, Daniel’s focus remains on the core longboard community where he feels at home. While the cruising trend is plummeting and many companies are facing to shut down their cheap boards productions, ROCKET keeps growing.

As a one-man company which produces everything in-house in Switzerland, the only way to survive is to find a niche. I ride downhill since 2002 and I was always looking for the best gear. Hence I found my place in producing high quality boards for customers who use them as sports equipment instead of fashion accessories. This gives me the advantage of being less dependent to the ups and downs in the market based on some hypes. Since I started to ride downhill I saw that the core scene didn’t change much numerically.