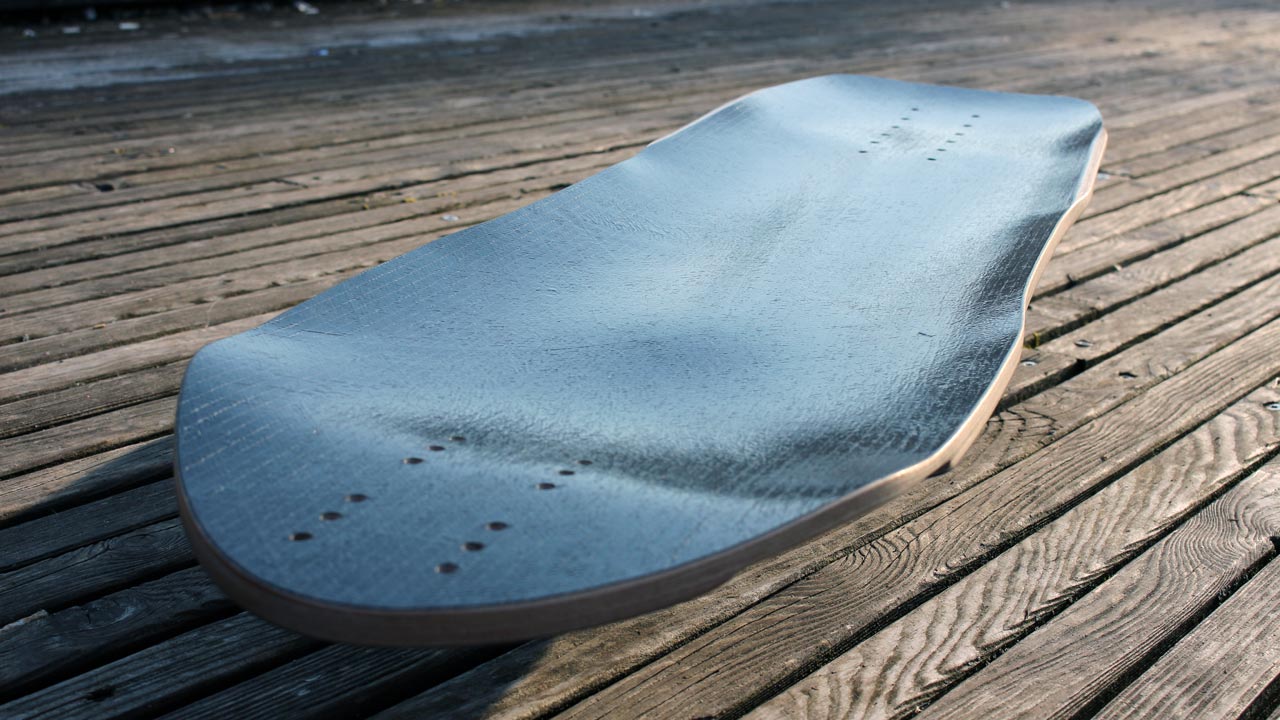 You know we love uploading expert reviews for you, and this longboard couldn’t be the exception.
Daniel Iseli from Switzerland started building longboards around seven years ago. He officially introduced ROCKET Longboards in December 2013 with a collection of four models, which soon grew into a full blown lineup of nine premium quality decks presented at ISPO 2016.
ROCKET Domination, Dominic Schenk’s pro-model longboard deck was released in late summer 2014. Since then the deck undergone a series of upgrades, until its final and current version.

In-house designed pneumatic presses, CNC-machined moulds, top materials, development and extensive testing with some of the Europe’s best riders… Daniel got it all covered very well and now distributes the boards around the world with confidence.

If you are interested to learn more about ROCKET Longboards see this article published in Concrete Wave Magazine, Fall 2016. For now, let’s check out the board and its features…

The Domination longboard deck was developed together with team rider Dominic Schenk for IDF racing season 2014, which didn’t turn out to be a huge success.
However, Dominic placed second at the Red Bull No Paws Down World Championship in 2015, and took the Domination on the podium. With so many eyeballs looking at his direction, it was hard not to notice “the rocket” Dominic was “flying”.
Six months later and after two years of development and testing, the Domination longboard deck is now one of the best choices when buying a highly functional and quality board for downhill or freeride.

Before I go into more detail, let me say that the photos I made hardly justify the beauty of this deck.

The Domination features a directional shape with a simple outline which narrows towards the center of the deck and kind of reminds us of a rocket. It looks simple and “evergreen”.
The glossy bottom side with the artwork really stands out and it gives the board a special look and feel. It feels as if it would be glass, but of course, it’s not. It’s a thin layer of PBT with the graphic sublimated on it.
The graphic was done by Chris Bögle a.k.a. Killerartworx and it features a pirate lady with a skeleton head and a hat, sitting on a [treasure] chest while playing a guitar.

While the graphic apparently doesn’t have any deeper meaning, it’s nicely done and it’s interesting. As if it would be reminding us that life is not forever and we should skate more.

The Domination deck features six layers of SFI-certified maple sandwitched between three layers of carbon fiber sheets to provide a solid and stiff platform for high speed skateboarding and slides. It weighs 2,05 kg.
As already mentioned, the bottom side is additionally covered with PBT for extra protection, graphic application and glossy finish. The top side of the board features an extra sleek look as you can see the texture of the black carbon fibres sheet.

The ROCKET Domination is a directional top-mount longboard deck. It is 91cm long (35.82 inch) and 25 cm (9.84 inch) wide. Wheelbase options range from 56 cm (22 inches) to 68.5 cm (27 inches), which allows personalisation depending on your stance width preference.

Too many concave features might be a turn off for riders who are concerned about a platform narrating their stance. The Domination shouldn’t fall into this category. When I stepped on it for the first time, I was surprised to find out how comfortable and well designed the platform is.
A combination of centered W-concave with a 0.39″ micro-drop in the front and flarred wheel wells creates a comfortable pocket which will prevent your front foot from slipping off.


The micro-drop in the front is compensated with a slight rocker in the back which ends where the truck mount starts and it doesn’t affect the angle of a truck hanger. In the front, this is taken care of by a CNC-machined flush mount. The combination of the W-concave and a continuous 0.59″ concave, provides a locked-in feeling of the back foot when in tucking position.

The flarred wheel wells are much bigger in the front, while in the back they are minimal and you can hardly feel them when standing across the platform.
The deck also features a minimal 3D kick tail for added fun and trickery.

Price and where to buy

At the time of writing this article, the recommended price for ROCKET Domination is 219 EUR (outside of Switzerland). This puts it in the upper middle price range. In case if you decide to get one, you will find it available via Sickboards for 218,95 EUR or via The Cave longboard store, which opens soon.
If you’re ordering from Switzerland, you can find the Domination in your local shop or order from ROCKET Longboards website in case if they don’t sell it.
To stay on track with ROCKET Longboards follow it via Facebook or Instagram.
There you have it! To wrap up this review, here’s a rad video Dominic Schenk made just for this occasion. Thank you for reading through!