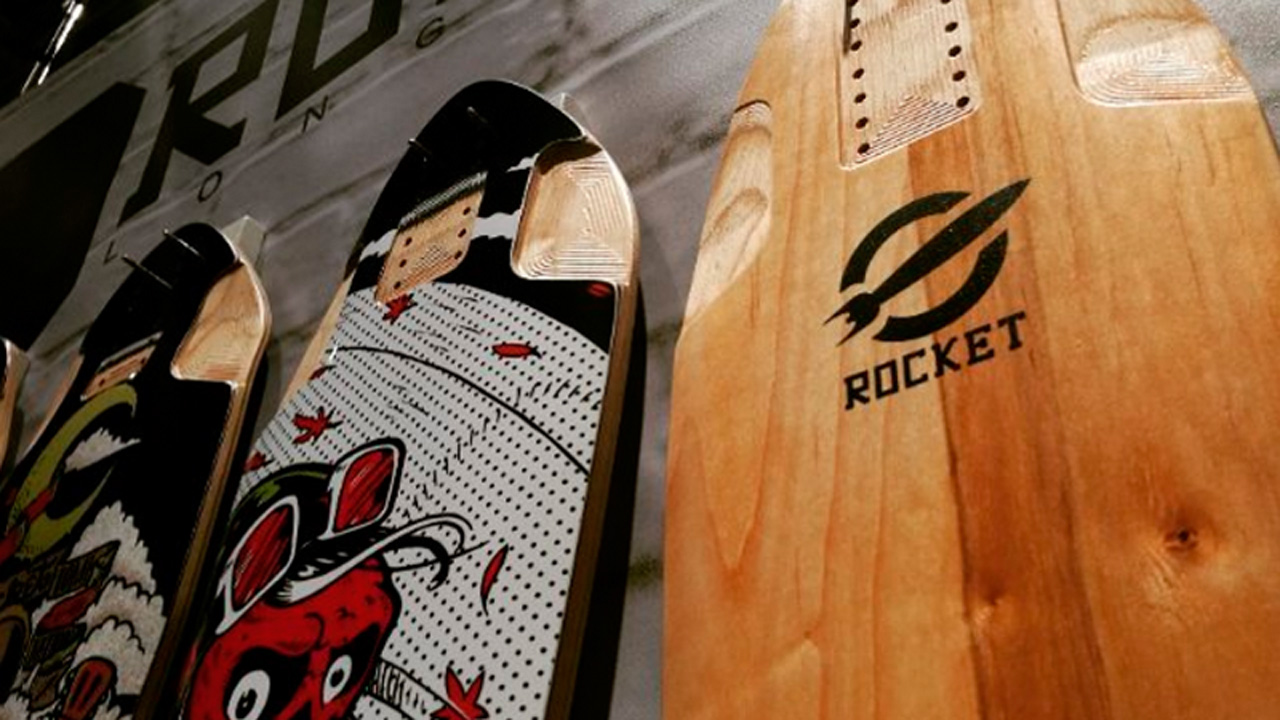 About a month ago I had the pleasure to present the Ian Freire Pro longboard deck by ROCKET longboards, built with their own LAF technology which makes the board extremely durable, lightweight and waterproof.
The announcement has garnered much attention, over 1k people visited the article during the first couple of days since it was published.
In the meantime, ROCKET’s website got a pretty rad overhaul. There you’ll find more information about their current team, work process and a bunch of other cool stuff.
Welcoming Ian Freire from Brazil, a Red Bull No Paws Down 2015 champion, will help ROCKET to stand out even more during this upcoming season. Something tells me that we’ll see Ian back to the Bear’s Guts this year, as last year Patrick Lombardi walked away with the title.
Daniel Iseli and his crew presented the Ian Freire Pro deck along with the two new 2017 models and the rest of the Rocket’s collection at ISPO Longboard-Embassy.


As he told me in one of our conversations, ISPO was a great success for ROCKET. The feedback on the new boards was great and people loved them.
Well, Daniel… What else can you expect when doing such a great work 🙂
Now, let’s see what’s there to love…

ROCKET took a big step forward this year and introduced a new construction technique code-named LAF which is shortened for “Light As Fuck”.
It includes a very light wooden core sandwiched between carbon and glass fibres with clear 3D embossed highly scratch resistant PBT top sheets. The core is sealed down with extremely strong polyurethane rails which make the board highly resistant to impact and waterproof.
The boards built with LAF weigh around 30% less compared to longboard decks built in a traditional way, while preserving the same flex and vibration absorption characteristics often missed in full carbon decks.
ROCKET currently offers two boards built with LAF – the Ian Freire Pro and the Stealth.

ROCKET offers 12 longboard decks, but in this article I’ll cover the 3 latest; the Stealth, the Ian Freire Pro and the Scout.
You can find all the other boards available for purchase with a free worldwide shipping via ROCKET’s website and you’re also most welcome to read my review of Dominic Shcenk’s pro model, the Domination.
So, let’s start with…


The Stealth extends ROCKET’s already quite versatile board selection by covering the riders who prefer the style of skateboarding that includes freestyle and dancing.
It’s a symmetrical top-mount deck, with 0.47″ concave and three wheelbase options raging from 27.5″ – 30″ enabling to match the flex and the length of the kicks to a preferred riding style.

The stealth is built with LAF technology and promised to last for a very very long time.
It is extremely impact resistant and waterproof thanks to the polyurethane rails as well as very lightweight, with a total weight of only 1600 grams (3.5 lbs).
The board also features minimal wheel well flares and pressed-in wheel wells which makes it safe to ride with more loose trucks.

The price tag on the Stealth is 269 Euros.
What else to say, it’s a great looking double-kick freestyle deck, I’ll bet you’re already drooling all over your keyboard, so let’s move to the next one…


The Ian Freire Pro is a 35,4″ long top-mount directional deck with a symmetrical platform designed with both downhill and freeride in mind.  It provides the same leverage regardless of the direction the board is facing making it a breeze to ride switch as well.
The Ian Freire Pro comes in two width versions; a wider 9.8″ and a narrower 9.2″ version. Both versions feature a progressive concave (16mm to 12mm), flared wheel wells and a rocker.

The wheelbase is adjustable from 23″ to 26″. The shortest wheelbase will enable you to use the board’s kick tail to its full potential, while the longest will make it more stable for downhill runs.
Just like the Stealth, the Ian Freire Pro is built with LAF technology to last for a lifetime as it’s highly impact resistant, waterproof and very lightweight, weighing only 1400 grams (3.1 lbs).
Related: You can read the full overview of the Ian Freire Pro in this article.

The price tag on the Ian Freire Pro is 269 Euros.
Last but not least…or to be more exact, the third new board ROCKET introduced this year is…


The Scout is an all-around 33″ long and 9.2″ wide directional top-mount deck with a kick tail.
As described by its maker, the Scout has an asymmetrical banana rocker which descends slightly in the front and raises steeper in the back to form the tail.
A short convex part behind the back truck anatomically adapts to your feet. This makes the tail super comfortable to stand on and also gives you a nice pocket for your toe side stand up slides.

The Scout is promised to be a great choice for skating pump tracks, pools, commuting or even bombing the hills, if you prefer a shorter wheelbase or if you’re a smaller person.
Built from Canadian SFI certified Canadian maple and Glass fibres, the Scout also features an extremely durable epoxy soaked veneer top sheet which protects the glass fibres underneath.

There you have it, the three newest boards by ROCKET Longboards.
Interested to see the other 9 boards? Click here.