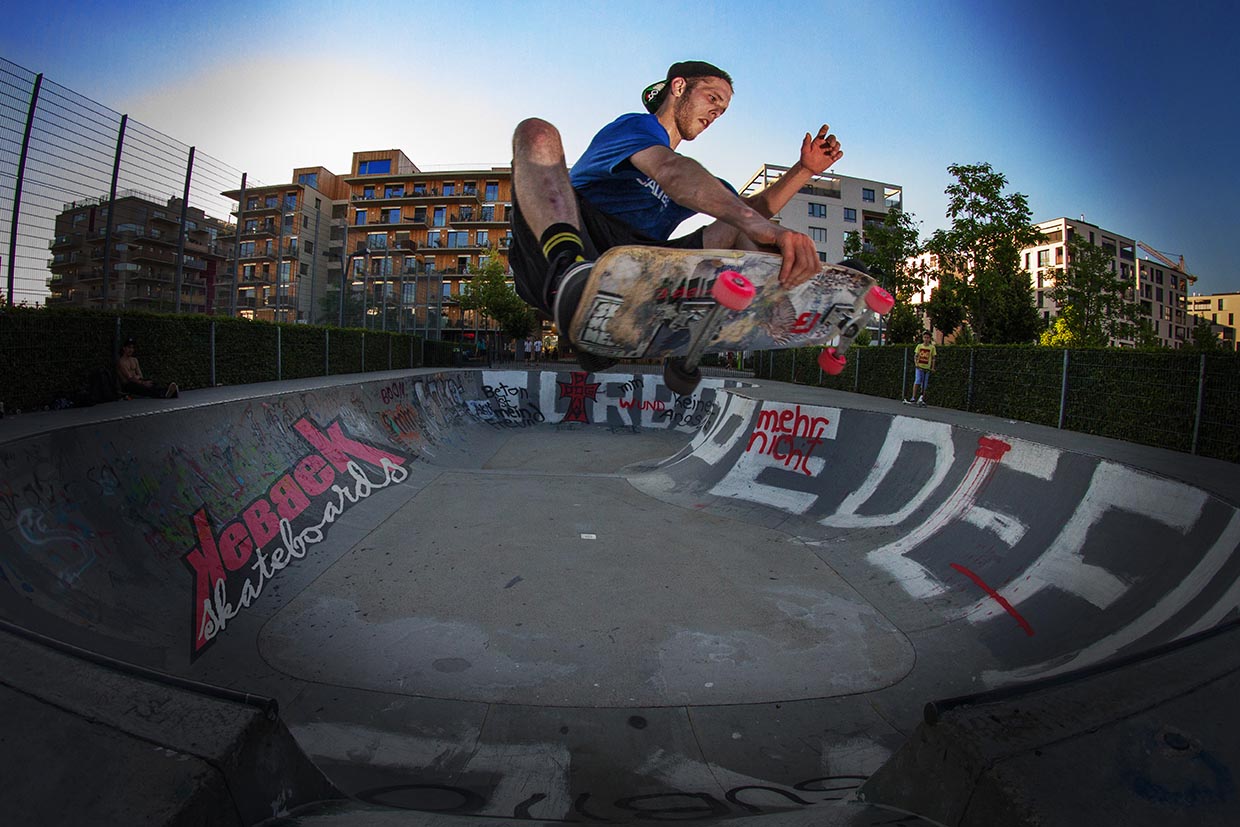 Jürgen Gritzner is a badass and well known downhill skateboarder from Austria. He’s also the first and so far the only Austrian who’s got his pro model deck produced by a non-Austrian company. We’ve met for a chat and talked about how his relationship with Kebbek Skateboards started in the first place, how he ended up on the RAD Wheels and Caliber Trucks flow team as well, about his alter ego “Ill Eagle” and his views on racing. Let’s drop in!

“Be true to yourself. Skateboarding is fun and always should be.” ~ Jürgen Gritzner

Hey Jürgen! How are you dude?
I’m fine! Thank you for asking. Partying and skating with the homies, you know, the usual business.
Great! To start off, tell us about how you got hooked up with Kebbek Skateboards?
It’s funny how that went down. My buddy, Felix Rupitsch (Bigmountainskate.com) was partying at a local Bastl Boards Bash and met the German distributor for Kebbek. They talked, had fun and in the end he mentioned that Kebbek’s looking for a European skater to represent them. Felix told him some s*** about me, how I love skateboarding, creating music and art, plus all other kinds of things I care about very much. It all ended up with Kebbek being pretty excited to get me on board and the next time I’ve met Felix, he asked if I would like join Kebbek’s team. I said “F*** yeah”, got in touch with them and sealed the deal. Later on, when I was already on their team, I finally got to meet Ian, the founder of Kebbek Skateboards.
That’s great. So, Kebbek was your first sponsor. How did you manage to get involved with your other sponsors? You’re also on a RAD Wheels team, right?
Yes, Kebbek was my first sponsor. Joining their team spiked up my motivation to travel to the USA and get some skate action overseas. I went there by myself and got to know the Skate House Media dudes. We were skating together all days long. A year later, in winter 2012/13, I managed to get back to the States, but this time I went with my homie Flo Wagner (Landyachtz Longboards, Hawgs Wheels) and we stayed there for five weeks. We’ve met Louis Pilloni in San Diego and showed us around the Sector 9 headquarters. That was exciting. He hooked us up with some wheels and a bunch of stickers. Loads of stickers. At some point, he finally turned over to me and asked “You wanna join the RAD crew?”. You can assume what my answer was, haha!

Of course, your answer was “F*** yeah!”. And you’re repping the Caliber Trucks as well, right?
That’s true, yes. It was not long after we’ve returned back home to Austria when I received a phone call from Dave Tinachi. He told about James Kelly joining the Caliber Trucks, but what really flipped me, was when said how each pro skater on their team gets to choose one “flow team rider” as well and that James chose me! Pretty rad!
What’s expected from you as a team rider for Kebbek and the other sponsors?
Basic stuff, you know. Going out skateboarding, snapping some shots and doing some other media works, like movies and sharing online. Once I mentioned that I would enjoy doing some graphics as well and Ian gave me the chance to do the designs for some flyers, stickers, posters and similar for Kebbek in 2014. Later that year, I also proposed that we could produce a promotion video for my pro model boards. Teammates Katiana Torrebella and Benjamin Dubreuil joined the party and we went on a nice skate trip for filming in a skateboarding heaven, Barcelona. My homies over at Frame Fatale from Vienna did a really good job filming and editing this movie.

That’s a great video. How did you end up with pro model boards?
After ISPO 2013, Ian and I really got to know each other. After we did a promotion tour across Europe he arranged a job for me in a German company where he was working as well. We talked a lot about skateboarding, my visions and other stuff. I guess he enjoyed having me around and wanted to push my skateboarding even further. He kind of mentioned once something about the pro model deck, but it didn’t seem to be so serious at that time. It was as all nice and chilled until at ISPO 2014 he pulled out a catalogue with the new boards. As I had a look at it, I saw my pro model downhill and pool decks in there. A big surprise! F***, Ian just knew that I also love to shred trannies and street. I was very happy about it.

So, Ian kind of secretly examined your skateboarding mind?
Haha! Well yes, if you want to put it that way. In order to pull that off with the pool deck, he definitely had to sneak into my mind. Regarding the downhill deck, he already knew what I like. I told him that I would love it if the board would feature a kicktail to be able to play around and that a platform has to be wide enough for my big feet. The same goes for a solid concave and a rocker. He did a pretty good job! I got even more stoked about it when he included “Ill Eagle” in the graphics for both boards.
What is “Ill Eagle”?
It’s kind of my alter ego, my artistic name. For example, I build skateboards with old snowboard moulds and create lots of art pieces with my hands. And in the end, it stands a symbol of my rebellious personality and skateboarding style. I’m always flying around! Haha!
[one_half]

[/one_half_last]
Most people know you for your badass freeride style, but probably for some racing as well as you where “flying” at Kozakov back in 2014. Where do you draw a line between racing and freeride?
Phuu, I think those two are hard to separate. Personally, I think in racing there are moments and situations which almost never happen while freeriding. And this is good as it is. Those special moments give me the thrill of racing on a skateboard. Only in racing you push your limits to 110%.
With freeriding it is just all about fun, racing is really serious. I never freeride without my homies. You know, I want to enjoy a good sunny day full of skateboarding without any stress and unhealthy competition.

But you are still a competitive skater?
Hm, that’s a hard question. Probably, there are times when I get extra ambitious, especially when racing. But I’m not that eager for winning like some riders out there, who are ready to subordinate everything just to win a heat or a race. I’m definitely not that kind of a skater. I love racing and getting that adrenaline rush, but some people are just going to crazy about winning. You can often see how they f*** each other up. This is not something that I stand for. What we do when racing is still skateboarding. Be true to yourself. Skateboarding is fun and always should be.
Great words and a nice closure for our interview. Any more last words, Jürgen?
Yes, I think so as well. Go out, skate and have fun. And of course big thanks to my sponsors Kebbek Skateboards, RAD Wheels and Caliber Trucks as well as a big shoutout to my homies!